G-Unit’s Young Buck isn’t sweating over making headlines this week for allegedly faking a drug test and being caught.

Buck Marley took to his Instagram page Thursday (May 21) to laugh off the controversy. 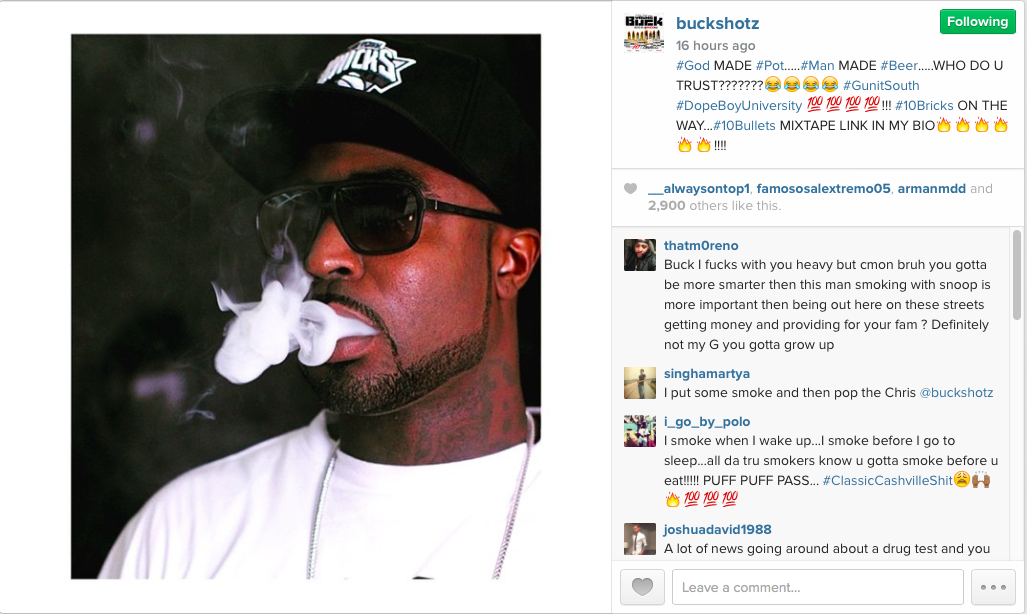 According to reports, fellow rapper Snoop Dogg played a big part in marijuana getting into Buck Marley’s body.

Buck literally got busted with his pants down according to a probation officer — who says he saw YB using a tube to shoot a “yellow substance” into his drug testing cup last week. According to docs … he first tried to use the ol’ secondhand smoke excuse, but ultimately caved and admitted he’d gotten high with Snoop. Now, a judge will decide whether Buck has to do jail time for the violation. Shame … Buck had been on a winning streak, pissing clean for his previous 21 mandatory tests since November 2013. (TMZ)

Resource Ventures, Inc. (REVI) Interim President Michael Cipolla is pleased to announce today that the company has signed a definitive agreement with internationally known recording artist David “Young Buck” Brown to print his upcoming memoire. “We are pleased that multi-platinum selling recording artist Young Buck will entrust us to print his upcoming novel,” says Cipolla. “He will be announcing the title and further details of his book soon.” (Yahoo! Finance)

Buck recently talked to SOHH about his various business ventures.

“My biggest focus is the music at this point. I feel like I’ve been away. I feel like when I went to prison I was dealing with a lot of issues whether it was the financial situation that I was going through or the whole fact of being away from G-Unit. All of that never hindered my music. It only made my music better. But it hindered me being able to get my music to the people. So I’m so loaded when it comes to the music and I’m so excited about the success. I’m so focused on the music and I can’t see anything outside of that. Of course I got the other things going on like Dope Boy University which is my clothing line. I got the movie roles going on. I’ve been taking a few acting classes, trying to get up on my 50 [Cent acting] game.” (SOHH)