California rapper YG has stepped up to speak out against disses and threats shot his way from fellow West Coast native DJ Quik. 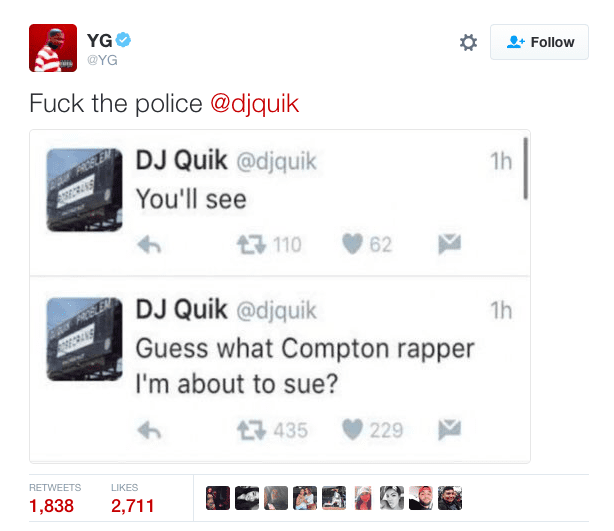 Hours prior, Quik went to Twitter and sent public shots at the California rapper for allegedly not crediting him enough for work on his “My N*gga” single. 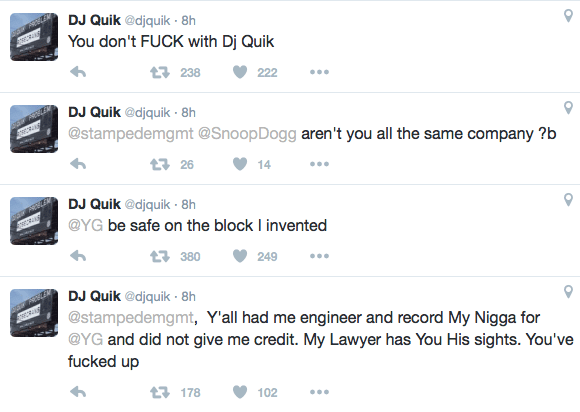 According to reports, Quik previously hinted at a lawsuit brewing against a Compton rapper.

Quik hinted at this feud back in June in a now-deleted tweet. “Guess what Compton rapper I’m about to sue?” he asked. “You’ll see.” “My N*gga” came out back in 2013, so it’s not exactly clear why Quik is only bringing this to light now. So far, YG has been silent on Quik’s allegations and hasn’t responded to his tweets. (Complex)

A few months ago, DJ explained why he called out Kanye West‘s The Life Of Pablo‘s album quality.

“I wouldn’t say this is a lack of talent. This is just a challenge. This is the music business. We love good music and just lately, you know, his music hasn’t been lighting my fire. And I’m a fan. … I expected something better.” (TMZ Live)