G-Unit head 50 Cent is making the best out of his Connecticut mansion by promoting his Effen Vodka line with it.

Fif showed off a picture of his home turning into an Effen Vodka headquarters last night (October 19) on Instagram. 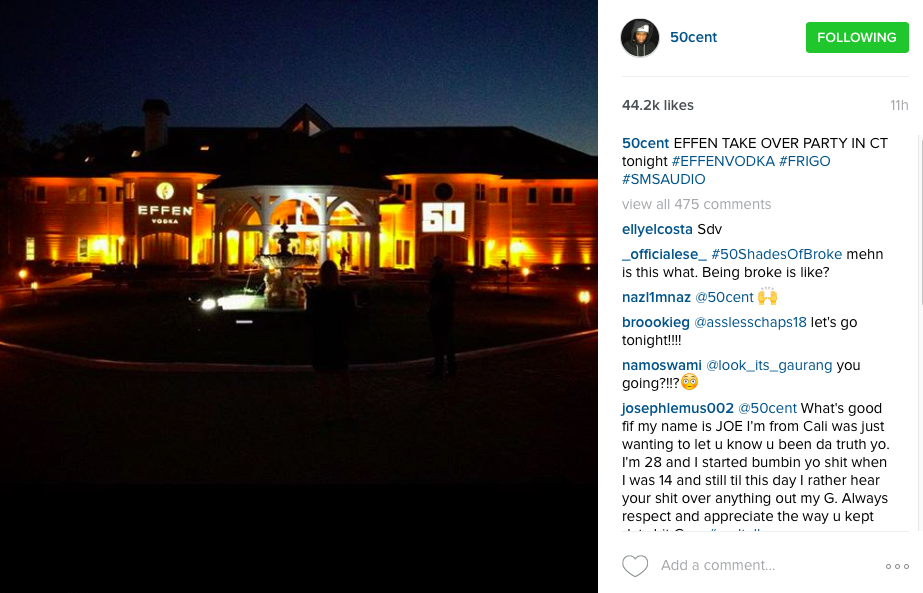 The entertainer Wednesday listed the 21-bedroom, 25-bathroom at 50 Poplar Hill Drive for $8.5 million, the latest in a series of reduced asking prices since 50 Cent first began trying to sell the property in 2007. (Hartford Courant)

The Hartford Courant reports the disclosure came Wednesday during a meeting of creditors. The meeting was conducted by U.S. Trustee, a federal agency that oversees bankruptcy proceedings. Stephen Savva, a lawyer for 50 Cent, says no deal had been reached to lease the Farmington mansion, which the rapper purchased in 2003. (ABC News)

Recent documents showed Fif had around $25 million in assets.

The records, published by Buzzfeed, also claim that 50 owes creditors more than $32.5 million dollars. His expenses, which range from lawn maintenance on his 21-bedroom Connecticut mansion to $12,000 a month in child support (he has two sons, Marquise and Sire), allegedly leave him with a comparatively modest gross income of $76,969.58. (Billboard)