Canadian hip-hop artist NAV has plenty to dish fresh off dropping his Good Intentions and Brown Brown 2 albums. The hip-hop star chopped it up in a new interview to dish on his new music, working with Lil Uzi Vert and Travis Scott plus much more.

Canadian rapper-producer NAV’s latest album, ‘Good Intentions’ which dropped last week, is poised go No. 1 on the Billboard 200. The rapper sat down with Genius’ VP of Content Strategy Rob Markman for the latest episode of ‘For The Record’ to delve into the new album. NAV discussed collaborating with Lil Uzi Vert on “Status,” talked about the mishap with his vocals on Travis Scott’s “YOSEMITE,” and opened up about his haters. 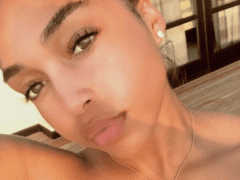