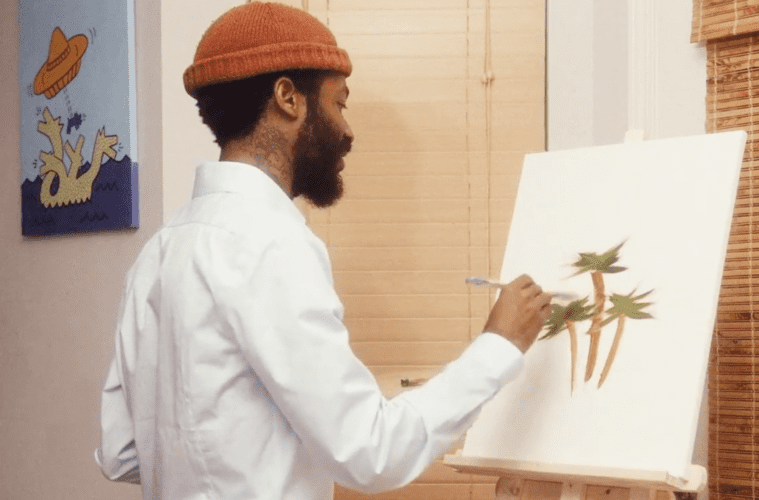 Dreamville’s Lute is keeping positive vibes and music coming. The hip-hop entertainer has come through with the launch of his new “Gold Mouf Chronicles” mini-series. Watch and comment below!

In the ever-creative Dreamville fashion, rapper Lute (Dreamville/Interscope Records) has announced the release of his very own mini-series, “Gold Mouf Chronicles,” to aid in the promotion of his latest single “GED (Gettin Every Dolla).” The eight-episode online series, directed and edited by Alexander Hall, features the artist’s alter ego, Gold Mouf as he partakes in a host of activities and pranks.

Just shy of five minutes, the first episode, “The Joy of Painting with Gold Mouf” is styled after a classic PBS program hosted by the late Bob Ross (The Joy of Painting). The episode opens with a mild-mannered Lute who quickly transitions into the charismatic, though slightly foul-mouthed, Gold Mouf, who walks viewers through the painting of a Keith Haring-inspired spaceship. Both intriguing and informative, viewers will appreciate the rapper’s intellect and ability to seamlessly slip between his two personas.

The online series serves as the second wave of promotion for the recently released “GED (Gettin Every Dolla),” which serves as the opening theme song. The single was first teased through a barrage of cryptic commercials which appeared heavily on social media early this year.

The accompanying Neal Farmer-directed video has racked up over 1MM views on YouTube. Lute continues to generate buzz for his undeniable skills as an emcee, as well as his incredible fashion sense. He can be heard on the Grammy-nominated RIAA certified Gold compilation album Revenge of the Dreamers III; receiving significant praise for his work on the track, “Under the Sun.”

Most recently, Lute shined when he performed a halftime set during a Hornets vs. Rockets showdown at the Spectrum Center in Charlotte, North Carolina. As part of the event, Dreamville gifted 7,500 fans with limited edition apparel.