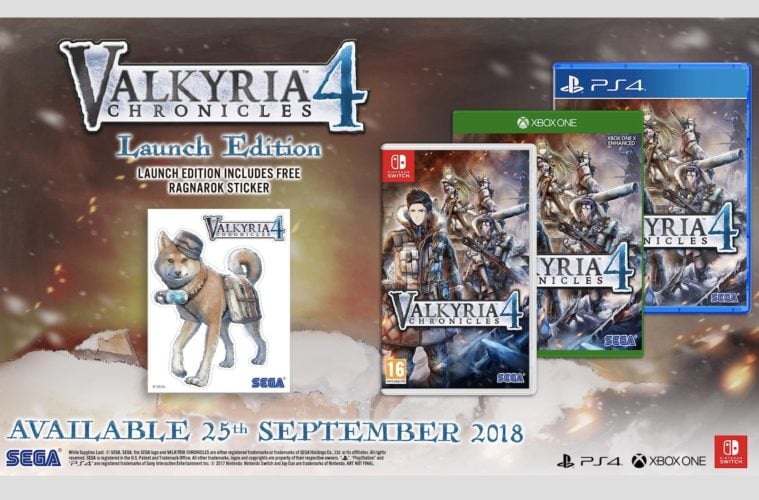 I love a good adventure game, even if it happens to be a turn based game. Valkyria Chronicles 4 is the latest installment in the series. Are you ready to take part in the most critical war in Europa’s history? Take the journey behind enemy lines, across all different planes in Operation Northern Cross. Yeah, sounds nerdy, but believe me, this one is DOPE! Here’s the top five reasons you should get out to GameStop, Target, or your go-to spot to cop this one on September 25.

Ever since SEGA has teamed up with Nintendo, SEGA has been on a roll lately with their titles. SEGA has created one of the most innovative turn-based-strategy-meets-tactical-action-game in recent memory. Being a strong Japanese based game company, SEGA was able to bring in one of their legendary composers from the original Valkyria Chronicles, illustrious Hitoshi Sakimoto. If you think music dictates a lot of the feel in a game, this one takes you on a roller coaster. Check it out for yourself.

This series has a great signature piece. The graphics are created in such a way it appears hand drawn. That is by design. The hand drawn style is matched with the most intensive newer generation of computer graphics. This one was created with water colors and blended with a new CANVAS Graphics engine. A state of the art computer graphic system. If you get nothing, the game is beautifully made. You can honestly lose track of the being overwhelmed with the art of the game.

Many things can be added into this story from the exclusive content in the Memoirs from Battle edition. With things like Ragnarok Controller Skin, more DLC adventures with more characters. You even get Claude’s Travel Journal. It’s an amazing art book that’s inspired from the game. Cop this exclusive edition and see how dope the content is for this one.

Reason 4: The Next Gen Battle System

This next gen battle system is something to be experienced. It’s a game changer. It is something special. It is the future of turn based RPG’s. Part RPG, part 3rd person shooter called “BLiTZ” battle is back in full force. There are some new features to include, such as the Grenadier, and fight the imperial threat with expanded battle options and the largest map the series has ever created.

Don’t get me wrong, I love NBA 2K and FIFA 19 (write up coming) but is it not also, refreshing to have a legit adventure game? Sports games fill the void when there is not another adventure game in the queue? This is a great one to have in the rolodex. This is one that will just keep putting out more content similar to Destiny and we all know you can never have enough content. Look at Zelda: Breath of the Wild, the game never stops. Keep this one around for more and better content to be released.

Valkyria Chronicles 4 is the continuation of a great story. And if you’re into the turn-based strategy RPG ala Final Fantasy style. Go out cop this game. Not only cop this game, cop the Memoirs from Battle edition and get the FULL experience. You won’t regret it, I promise.