Rich Gang’s Rich Homie Quan has stepped forward to speak out on his “I Made It Questionable” song leaking this week and rapping about rape on it.

In his statement, Quan apologized for the record reaching the masses and affirmed his stance against rape. 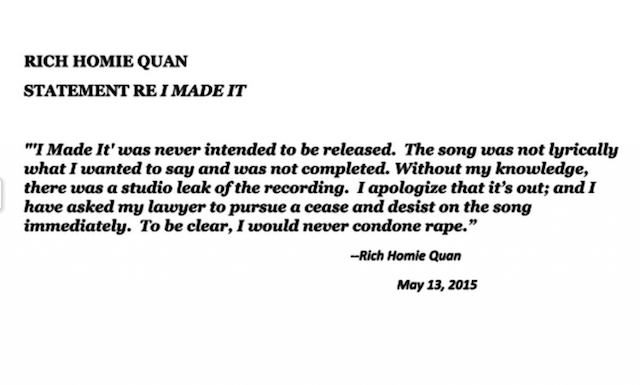 A snippet of Quan spilling out the shocking lines from a song called “I Made It Questionable” surfaced Wednesday (May 13).

According to reports, the song is part of a recently released Rich Gang package.

A degree of self-awareness kept the song under wraps until now, but we wish Quan would have had the presence of mind not to say this shit in the first place. The full song leaked back in December but has resurfaced due to a new packaging of unreleased songs from Quan, Young Thug, and Birdman. (Complex)

A few weeks ago, the rapper admitted hearing his friend Young Thug call him “B*tch Homie Quan” hurt him.

“Not to get in my feelings, but it hurt,” Quan revealed referring to Thugger’s remark. “Not as in I’m going to cry, but I would never disrespect you point blank period, especially when we have each other’s numbers.” (“Highly Questionable On ESPN”)