Hustle Gang affiliate Iggy Azalea has come forward to speak out amid reports and rumors which claim she has ended her ties with longtime hip-hop mentor T.I.

Iggy put a swift end to the speculation and revealed she is still a Hustle Gang artist on Twitter Thursday (September 17). 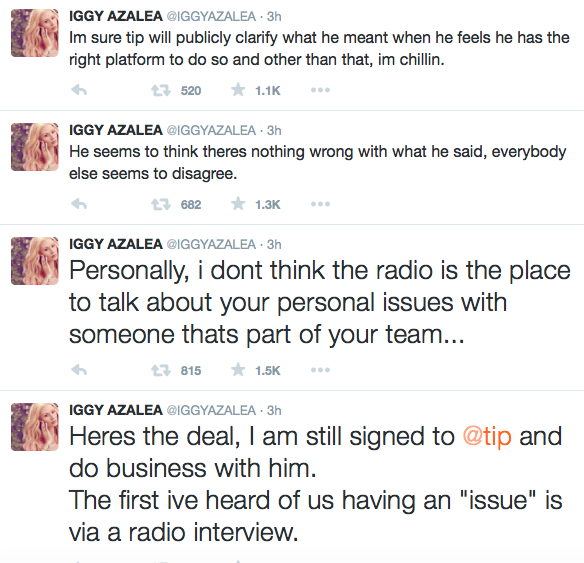 Find out what dicey comments T.I. made about Iggy Azalea on the next page…

Thursday (September 17) reports claimed Tip and Iggy had split up a couple years ago.

Based on our interactions with T.I. it seemed he ended it with her sometime in 2015. According to our Iggy sources, they had a mutual parting of the ways in 2013, when she signed with Island Def Jam. As one source put it … T.I. hasn’t had any involvement in the last 10 songs she’s put out … many of which have climbed the charts, like “Trouble” and “Pretty Girls.” We’re told the two are still on amicable terms, and there’s some sort of deal where T.I. gets a percentage for discovering her. (TMZ)

In an interview this week, Tip talked about being slowed down by Iggy.

“Right now, I’ma block the bullets,” Tip said referring to his past relationship with Iggy. “When I say, ‘Go?’ Go! Don’t stand around and tote while I’m blocking bullets. You slowing me down, you know what I’m saying?” (“Ebro In The Morning”)

Last October, Tip spoke up for Iggy amid stereotypes being fired at her.

“It should be attributed to her work ethic, her artistic views, her impeccable ability to kind of, she has a vision for herself and this vision for herself, she will not compromise,” Tip said when asked how Iggy should be classified. “I think she should be kind of judged based on that instead of her creed and her nationality and what country she’s from. I think all of that, those are stereotypes. I put her wherever she made the most noise, you know what I’m saying? I think when you start trying to classify people in different categories, you diminish the purpose of what we do. We try to bring people together – I think she can go into a lot of different genres.” (Hard Knock TV)