R&B singer Chris Brown has reportedly stepped forward to speak out on reports about clashing with ex-girlfriend Nia Guzman over their daughter’s health being in jeopardy.

A screenshot of Chris Breezy denying accusations of having smoke around his their daughter on social media has surfaced. 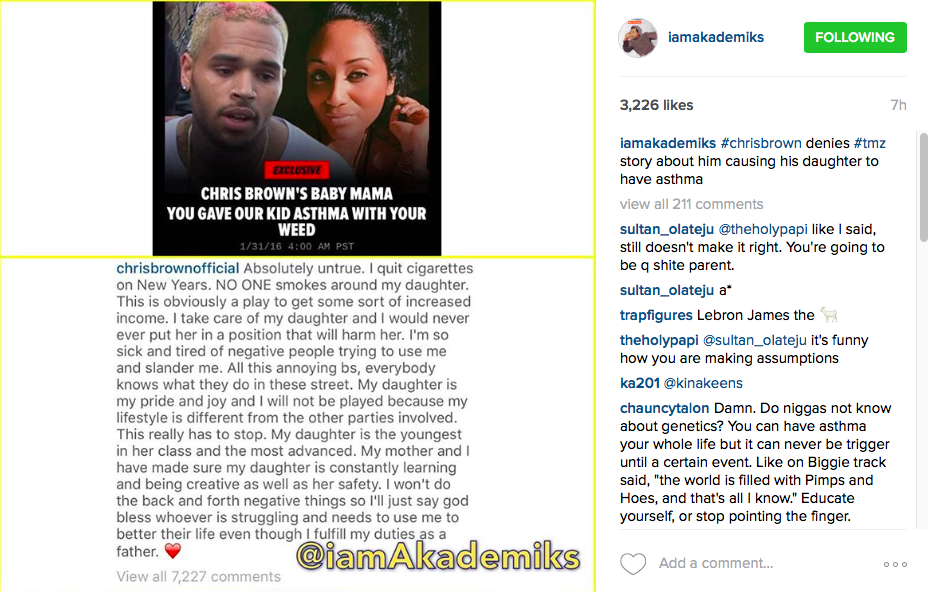 Nia says when Royalty comes back from a visit with Chris she usually reeks of smoke. Guzman also claims in legal docs she’s worried Chris is abusing drugs and has relapsed … especially with sizzurp. Nia wants to restrict Chris’ visitation … asking the judge to force him to hire a full-time nanny or pull back on his right to be around the child. (TMZ)

“It’s actually great, it’s very humbling, and it’s very calming,” said Brown about fatherhood. “Being able to be a father and seeing my daughter from those gradual stages — from crawling, to walking, to saying words, to learning different things every day — is kind of teaching me patience and it’s been great.” (“On Air with Ryan Seacrest”)

Chris also talked about putting an end to smoking because of his daughter.

“One habit I’m quitting for the New Year’s resolution is definitely smoking cigarettes. For my daughter to be a light in my life, I think this is something I need to get rid of.” (“On Air with Ryan Seacrest”)