Former Roc-A-Fella Records rapper Beanie Sigel is reportedly on the road to recovery after nearly losing his life Friday (December 5) from a shooting.

A new photo of Sigel in hospital attire surfaced online hours after the incident went down. 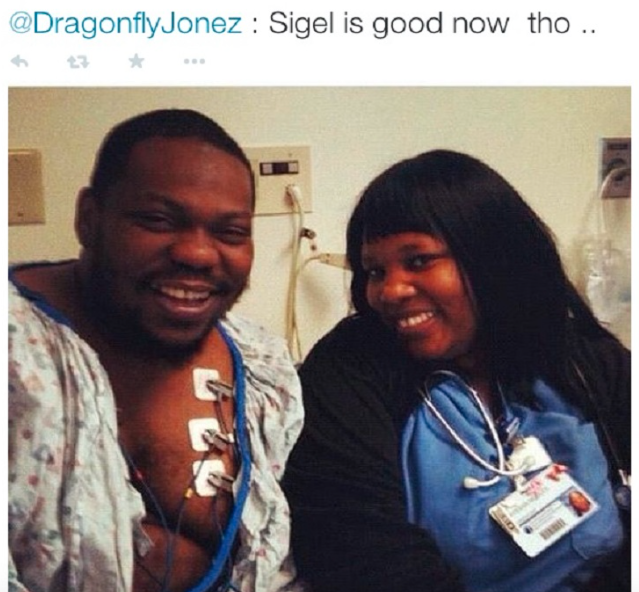 According to reports, the shooting went down in Pleasantville, New Jersey around 9:30 a.m. EST.

Sigel was previously shot nearly a decade ago in his hometown.

Beanie was shot once before during a 2006 bank robbery in Philadelphia. In 2003, he was charged with attempted murder after he allegedly fired 6 bullets into a Philadelphia nightclub, sticking a man in the foot and stomach. He was later acquitted. (NY Daily News)

Beanie Sigel is out of prison. Multiple sources confirmed to XXL that the former Roc-A-Fella rapper was released from the Federal Detention Center in Philadelphia this morning after serving just under two years on two charges, one of tax evasion and one of drug possession, served concurrently. DJ Drama posted the above photo to his Instagram account, welcoming home the Philly rapper and former G-Unit soldier. (XXL Mag)

Earlier in the summer, Houston rap veteran Scarface promised Sigel was going to hit the rap game hard once he completed his bid.

“Every song that you hear from me, from now on, is going to be meant with malicious intent, everything that’s coming out of my mouth,” Face said in an interview with DJ Whoo Kid. “It’s going to be, you know, okay? I’m gonna be straigth up f*cking real with you, man. It’s gonna be tough to f*ck with that boy, man. I’m telling you, go get ’em. I know when he get out, every lyric he spits is gonna be with malicious intent. It’s gonna be hard to f*ck with that boy, too. Yeah, man. [laughs]” (“Whoolywood Shuffle”)