UFC President Dana White‘s not here for the Floyd Mayweather Jr. trolling of his standout protégé Conor McGregor. The UFC boss has shot out some dicey words to Money Mayweather over his backing out of a money-making bout with the Notorious One.

In White’s opinion, McGregor’s love for fighting and passion to go up against anyone gives him the edge of Mayweather in selling pay-per-view matches.

“I’m going to tell you why Conor McGregor is still doing over a million pay-per-view buys and Floyd isn’t. Because Conor McGregor will fight anybody, anywhere, anytime, including Floyd Mayweather. He absolutely is that guy,” White said. “Whether Conor fights Floyd or he doesn’t, there’s a line of guys that are ready to fight Conor that Conor will fight that are going to do over a million pay-per-view buys.” (Fox Sports)

White also reacted to Floyd recently flexing his muscle on Instagram with some Conor trolling.

“Conor McGregor loves to fight and he is one of those guys that will take on anyone, anywhere. Floyd keeps putting this thing on his social media of Conor getting choked by (Nate) Diaz, but Conor fights. I’m the guy that stands in the living room and tells you your opponent fell out or on the phone and I know how all these guys react when it happens. Nobody reacts the way Conor McGregor does.” (Fox Sports)

Earlier in the week, Mayweather clowned McGregor over his net worth. 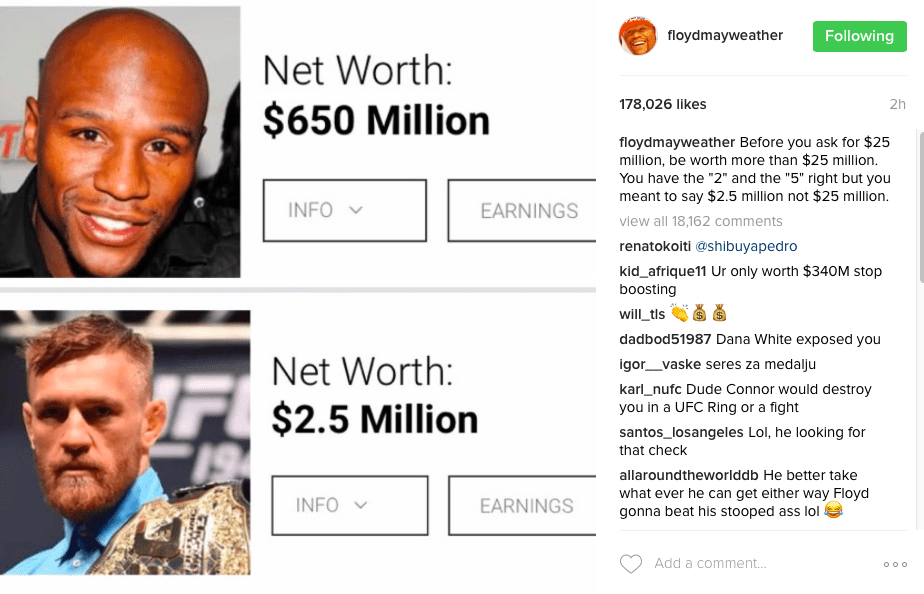 Recently, Floyd talked about the possibility of lacing up and fighting McGregor.