According to White, he believes the fight could go down as early as this year but that contract talks likely won’t start until Conor reaches fatherhood.

Everyone can breathe a sigh of relief. In an interview with Yahoo Sports’ Chris Mannix, UFC president Dana White was asked if there was an update on negotiations for the superfight. “Well, Conor McGregor is having a baby right now,” White told Mannix. “After his girlfriend delivers their baby, we’ll start working on this deal.” (Yahoo! Sports)

Last month, White talked about the inevitable bout going down.

“I do think it’s going to happen. I think it’s going to be a tough deal, because obviously, a lot of egos involved in this deal and a lot of people, so that always makes it tougher but on the flip side, there’s so much money involved, I just don’t see how it doesn’t happen – and it would be boxing. … Conor McGregor is huge. He’s in the prime of his career. Floyd is 40. Floyd has always had problems with southpaws. Conor is a southpaw, and Conor hits hard. When he hits people, they go. Floyd is definitely not knocking him out. That’s for sure. I’m not saying Conor would win this boxing match, but it sure makes it interesting.” (“Conan”)

A few days prior, Mayweather announced he would come out of retirement to box Conor.

“For Conor McGregor, I’m coming out of retirement, just to fight Conor McGregor: I don’t want to hear no more excuses about the money, about the UFC. Sign the paper with the UFC so you can fight me in June. Simple and plain. Let’s fight in June. You’re the B side, I’m the A side. We’re not here to cry about money. I’m tired of all this crying about money and talking about you want to fight. You blowing smoke up everybody’s ass. If you want to fight, sign the paperwork, let’s do it. … Today, I’m officially out of retirement for Conor McGregor. We don’t need to waste no time. We need to make this s–t happen quickly. Let’s get it on in June.” (FightHype)

In mid-February, McGregor and Floyd Mayweather went at each other’s necks on social media. 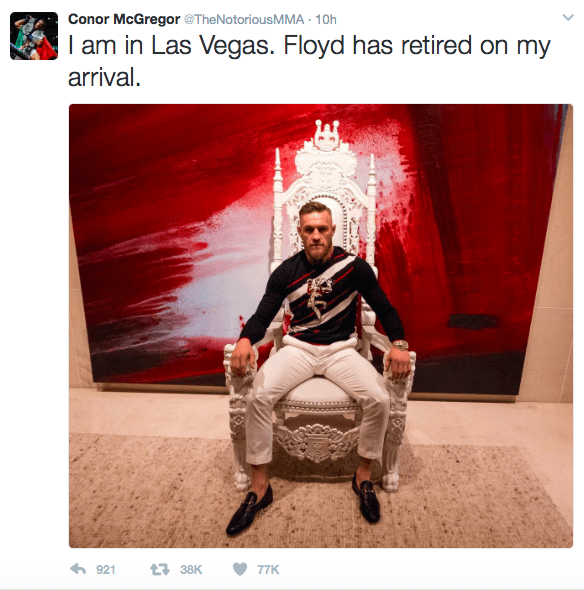 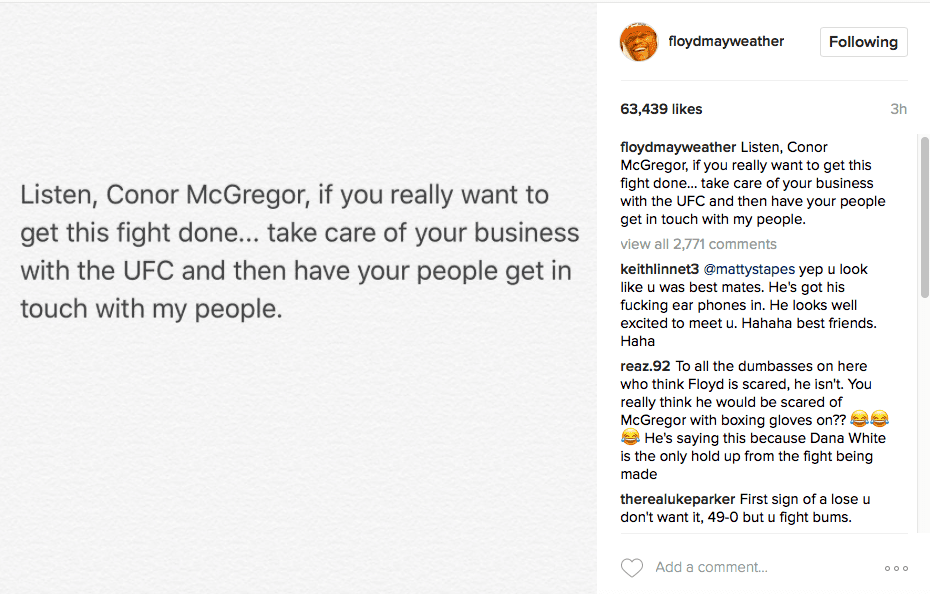