G.O.O.D. Music‘s Tyga is on the right path after dishing out $100,000 to a jeweler. New reports claim the hip-hop star is steadily etching away a hefty debt.

According to gossip news, Ty has paid half of a $200,000 jewelery debt and promised to cough up the rest by mid-November.

TMZ broke the story … Jason’s lawyers recently grilled Tyga on his assets, and even subpoenaed Kylie to get to the bottom of Tyga’s finances.
But the rapper’s lawyer appeared in court Tuesday and told the judge Tyga’s making good on the debt … at least a chunk of it. The lawyer says the entire debt will be paid by November 17th. (TMZ)

Tyga, who flipped off our photog and aimed a pretend gun at him on the way in, was pretty accommodating, telling Jason’s lawyer, Boris Treyzon, about his income and what he owns. But then Treyzon started grilling Tyga about various gifts he’s given Kylie, and that triggered a 911-type emergency. We’re told Tyga said he started feeling extremely ill, lost memory and became confused, telling the lawyer he just couldn’t go on. (TMZ)

A few days prior, Jenner teased Instagram followers with a coupled up shot of herself and Tyga. 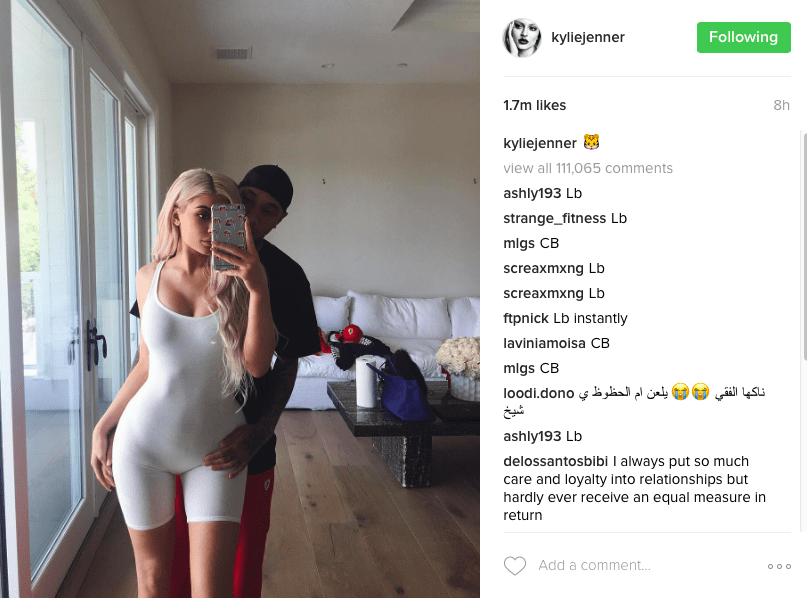 Recently, Kylie shared a rare picture of herself with Tyga’s son King Cairo.

In the mirror selfie, Jenner, wearing an oversize pink t-shirt, smiles as she stands alongside King Cairo, who is gazing adorably up at the camera. The Snapchat marks the first time Jenner has posted any photos of King Cairo on her social media accounts since she was first linked to Tyga in late 2014. (People)