Young Money’s Tyga and celebrity Kylie Jenner made sure to let the world know they are still madly in love this week in California.

Pictures of the friends-turned-lovers coupled up in Hollywood have surfaced online.

The pair arrived at the Roxy in West Hollywood in Tyga’s new Lambo. As for the story … it seems to reinforce what we’re being told — Tyga and Kylie are still together. They just want to keep their professional lives separate. Second, Tyga’s got a Lambo and that’s interesting because he’s been sued, sued and sued again for owing money. (TMZ)

Recently, Tyga talked about the struggles which come with fame.

“It’s a gift and a curse,” Tyga says about life in the limelight. “You can never really get used to people chasing you all day, but whether you’re an actor, a rapper, or an athlete, that’s the life you chose,” he adds. “You sacrifice your freedom.” (Yahoo! Style)

During an appearance on “The Ellen Degeneres Show” last month, Kylie Jenner assured concerned fans she did not break up with her rap star boyfriend.

“No, honestly, people have it all wrong,” Jenner said when asked if she split with Tyga. “We’re not broken up. We just, honestly, we became best friends before anything happened so I think that’s awesome and we’re just like, I don’t know, hanging out, living life. We’re hanging out. [laughs] Um, we’re still together. [Did he buy me a car?] I know, I drove it here.” (“The Ellen Degeneres Show”)

Jenner posted up a picture of herself and Tyga onto Instagram a few days prior. 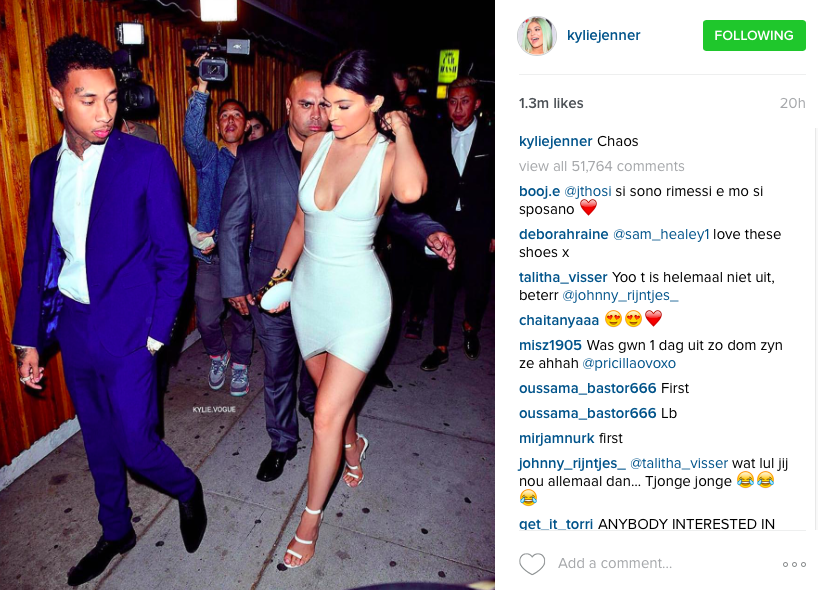