Tyga Gets His Grown Man On, Extends Hand To Nicki Minaj & Drake?

Young Money’s Tyga may be trying to put his past rift with labelmates Nicki Minaj and Drake behind him heading into the weekend.

Screenshots of Tyga following his one-time rivals on Instagram have sprouted online. 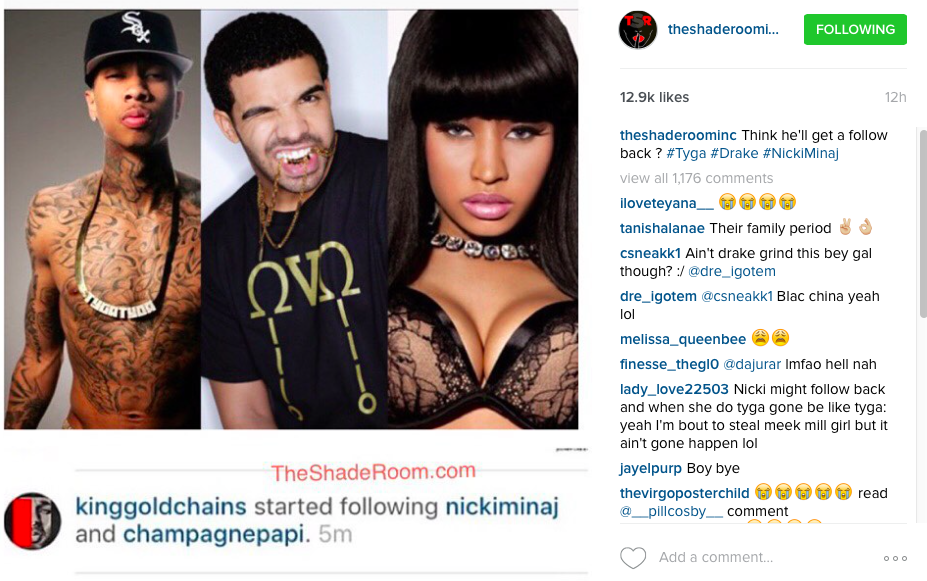 Earlier this year, Tyga explained his problems with Drake.

“Sometimes you have a light-skinned moment,” Tyga said referring to his feud with Drake. “He knows exactly where my house is, I know exactly where his house is – we live next to each other – if it’s real, it’s real. If it’s not, it’s not. I just don’t f*ck with him as a person because the experiences that I’ve had with him personally. I’m not going against who he is as a person to the public or his music or anything like that, like I said, his music is great and it’s undeniable. It’s his moment. It’s really not a beef, it’s just personal experiences I’ve had with him. … I feel he’s a nice guy on the outside but he’s not genuine. He plays people left and right. That’s just like my opinion – at the end of the day, when I did that interview, that’s how I felt [at the time].” (“The Breakfast Club”)

The rapper also admitted his issue with Nicki Minaj stemmed from a song.

“Me and Nicki [Minaj] got into it over something stupid, it was over a song. But that’s what brothers and sisters do, they fight. I don’t have anything against Nicki. I f*ck with her 100 percent. It was a song that Drake was on. It was actually ‘Truffle Butter.’ I was on the record. I don’t know, it just got weird. It wasn’t real to me. I feel like that was Drake’s song. That’s just how I felt.” (“The Breakfast Club”)

Last fall, Tyga publicly singled Drake and Nicki out in a Vibe interview.

“Yeah, I’m tryna’ go independent. I don’t really get along with Drake. I don’t really get along with Nicki,” Tyga said in his interview. “I don’t like Drake as a person. He’s just fake to me. I like his music; you know what I’m saying? I think his music is good, but we’re all different people. We were forced together and it was kinda’ like we were forcing relationships together. It is what it is. But I been friends with Chris [Brown] for like six years. That’s my real genuine friend. We hang out all the time. He lives up the street from me, so we don’t just do music we hang.” (VIBE)