Tyga Accused Of Doing Female Dirty, Could Lose Over $1 Million

Young Money’s Tyga cannot avoid the headlines this week after reportedly being singled out by an alleged former business partner over his Last Kings clothing line.

According to reports, female businesswoman Chuon Guen Lee claims they formed the line in 2013 with Tyga promising to heavily promote and get it into clothing franchises like Tilly’s.

Lee says none of those things happened, and then Tyga made off with more than half a mil in merch. The real kick in the gut — she says he started another company with another partner, and cleverly named it … Egypt Kings. Needless to say, Lee is not amused by the wordplay. She’s suing Tyga and his new partner for $1.6 mil, plus damages. (TMZ)

Our sources say the Cash Money honcho thinks Tyga sunk his album — which sold just 2,200 copies in its first week — because everyone could listen to the songs for free. By comparison, Tyga’s last record sold nearly half a million copies. We’re told Birdman thinks Tyga purposely pulled the “childish” stunt … to get out of his deal, and go sign with Lil Wayne — but Birdman’s not counting this album. That means Tyga would still owe him another one. (TMZ)

Recently, Tyga lashed out at reports about his new The Gold Album underselling. 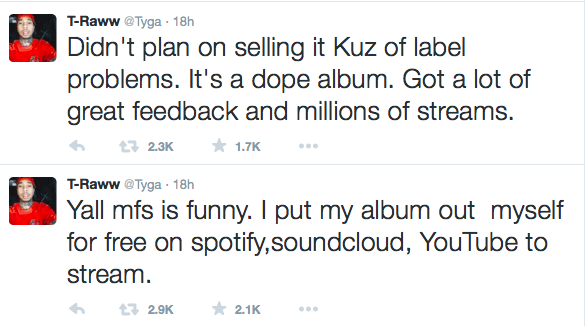 Tyga released The Gold Album: 18th Dynasty on iTunes last week, with a little help from his rumoured girlfriend Kylie Jenner. However the Kardashian konnection doesn’t seem to have done much for sales, according to Complex Magazine, SoundScan say The Gold Album has shifted 2,200 copies in its first week of release. (Metro)