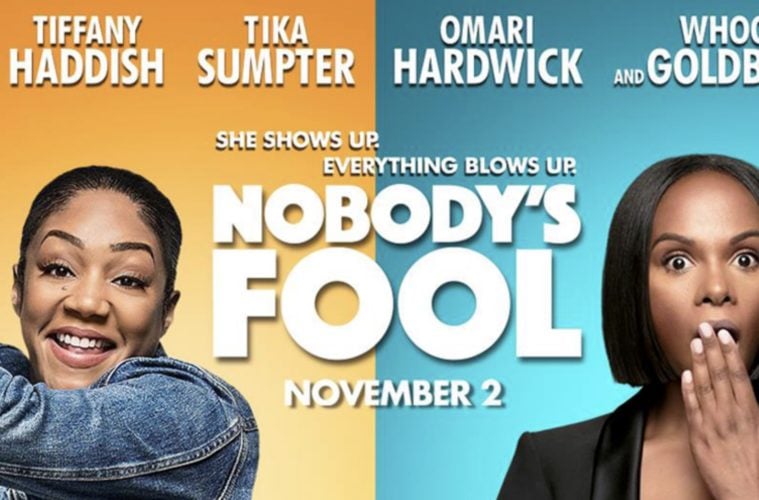 Do you need to see a new movie? Could you use a few laughs in your life? Need a reason to get out of the crib?

Today, check out the top five reasons you should head out and see Nobody’s Fool when it hits theaters Friday, November 2! [Check out each reason and grab your own screening passes to select theaters!]

The first reason you should go see Nobody’s Fool is because of the plot. Let’s face it – sometimes movies can just get too complicated or messy with overwhelming storylines, boring scenarios or just too many different elements thrown into it – typically resulting in 2-hours and running movie times. Nobody’s Fool is your go-to comedy of the fall! It centers on things everyone can relate to – notably dating, online flirting and family ties. Via Wikipedia:

Tanya (Tiffany Haddish) is released from prison and reunites with her sister Danica (Tika Sumpter), only to learn she’s in an online relationship with a mysterious man who might be “catfishing” her. (Wikipedia)

Simple yet compelling. The movie plot alone is worth your time and interest – plus the trailer just looks ridiculously funny!

The second reason you should go see Nobody’s Fool is because of the star-studded cast. No offense to everyone else but Tiffany Haddish has turned into a massive Hollywood superstar. Ever since she stole the spotlight in Girls Trip, Haddish has dominated in tons of movies, notably the recently released Night School comedy. Along with Haddish, you can look forward to star power from Tika Sumpter, Whoopi Goldberg, Omari Hardwick and Amber Riley. Black excellence!

The third reason you should go see Nobody’s Fool is because of what Tyler Perry brings to the table. He’s received notoriety with his Madea character but over the years Perry has flexed his muscle in a series of gripping films – notably Taraji P. Henson’s Acrimony and The Single Moms Club. Perry always comes through with major expectations for each film and easily meets them. In addition to directing Nobody’s Fool, Perry also wrote this jam-packed comedy.

The fourth reason you should see Nobody’s Fool is because of the genre. Comedies always win and bring people together. Then factor in the element of catfishing and all the hijinks involved plus some Tyler Perry humor? Must-see!

The fifth reason you should go see Nobody’s Fool is because of the competition in theaters on November 2. If you needed a fun night at the movies with packed seats and lots of excitement, this is the perfect time! Along with Nobody’s Fool, people are going to hit theaters to see The Nutcracker and the Four Realms and Bohemian Rhapsody. From Friday through Sunday, there is something to bring you out to the theater.