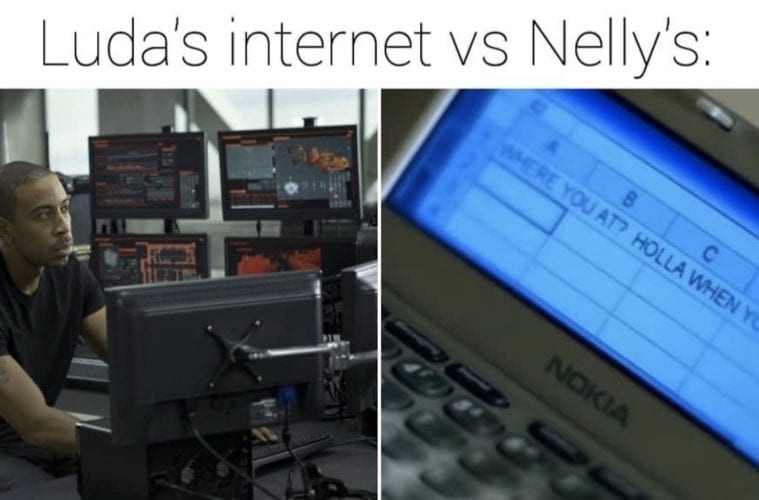 The Internet Completely Roasts Nelly After His Cringe Battle Against Ludacris

Over the past few hours, people have roasted Nelly about his Internet woes during Saturday’s bout. The multiple instances sparked a flurry of hilarious memes roasting Nelly.

SOHH TIP: Listen to epic battles like Nelly vs. Ludacris with quality headphones — Tribit’s QuietPlus were named the “Best Wireless Noise Canceling Headphones Under $100 (CNET)” and include their exclusive hybrid noise cancellation technology. Get 15% off through May 31 with code QP15. Check out the full line-up.

Nelly ultimately took a hard hit because of his location. The Missouri native reportedly dealt with bad weather around his area.

The hip-hop veterans made sure to put respect on each other’s names. Both Luda and Nelly shouted each other out for putting out quality music during the early 2000’s.

Last night, the hip-hop superstars went round for round in a battle of hits, revisiting iconic fan-favorite tracks. Nelly and Luda kicked off the event by acknowledging each other’s achievements. “Your longevity is impeccable, it’s worth commending, you know what I mean?” Nelly told Ludacris. “You bust ass every year to make sure you were coming for the No. 1 spot … It’s my pleasure and it’s an honor today, my brother, to be rocking with you. I’m glad that our rookie class is the best class of our hip-hop era.” (HIGHSNOBIETY)

During the broadcast, Luda pulled out an unexpected wild card. The Atlanta native shared a first-ever listen to a new record with rap star Lil Wayne.