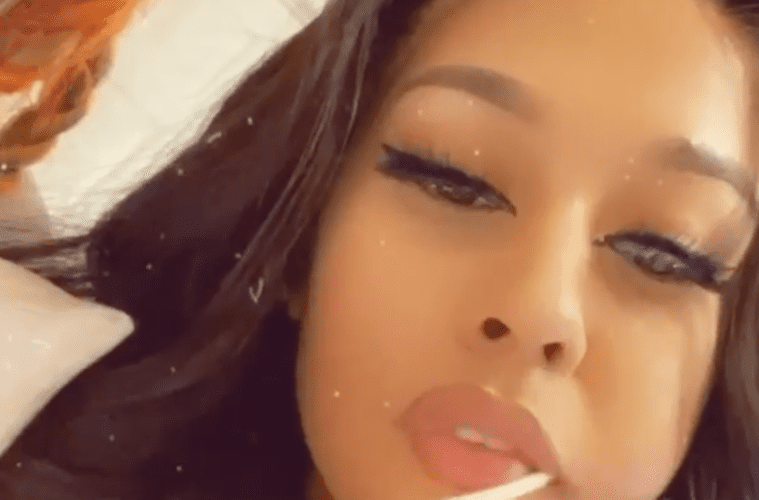 New York rapper Tekashi 6ix9ine has a reason to enjoy house arrest these days. The hip-hop star’s girlfriend Jade has delivered a friendly reminder to fans about what the controversial musician is shacked up with.

Last night, the curvy vixen went online to share a must-see pic. She referenced 6ix9ine’s current house arrest countdown in a thick pic of herself.

SOHH TIP: Switch up your look like Jade and get into the colored hair trend with a rainbow wig from Dolago. Made from 100% human hair, Dolago has all your hair extension needs covered.

Recently, Jade shared some jaw-dropping footage of herself and 6ix9ine. In the clip, Tek is shown spanking her in a room.

6ix9ine has had no problem letting his rap feud with Meek Mill flourish. The hip-hop entertainer recently trolled the Philadelphia rap heavyweight with some unexpected shade. Tek went online with footage of fellow Brooklyn native Casanova 2x talking about snitching not ending a rap entertainer’s career. 6ix took things a step further by referencing Meek and his 2015 “Rico” song and how he ultimately went behind bars on a probation violation related to dirt bikes.

Recently, Tek went online to get everyone dragging his name across social media for snitching. 6ix9ine also hyped up his “GOOBA” music video reaching over 100 million YouTube views in less than 72 hours.

“Look at the numbers in 3 days…. look at everybody who clout chases off my name find me something they did that can match that……… MATTER FACT combine them all together give them some help 😂😂😂😂😂😂😂😂😂😂😂😂😂😂😂😂😂😂😂” -Tekashi 6ix9ine’s Instagram

SOHH TIP: Switch up your look like Jade and get into the colored hair trend with a rainbow wig from Dolago. Made from 100% human hair, Dolago has all your hair extension needs covered.