As seen on SOHH.com - follow @sohh @sohhdotcom
3.3k Views Comments Off on Tekashi 6ix9ine’s Baby Mama Jade Teases Mile High Club Goals: “You Don’t Wanna Know What Happened When We Got In The Air”
Share

New York rapper Tekashi 6ix9ine didn’t have to worry about having a boring flight from the Big Apple to Los Angeles this week. The hip-hop star’s girlfriend Jade has teased fans about what possibly went down in the air.

Heading into Thursday, Jade went to her Instagram page with a pic of herself boarding a flight to Los Angeles. She took her trolling goals a notch by hinting at something steamy possibly going down in the air.

A few hours ago, Tek went to his Instagram page with footage of himself and girlfriend Jade living their best life on the West Coast. 6ix9ine shared clips of them hopping off a private plane and also strolling down the streets of Santa Monica.

Comments Off on Tekashi 6ix9ine’s Baby Mama Jade Teases Mile High Club Goals: “You Don’t Wanna Know What Happened When We Got In The Air” 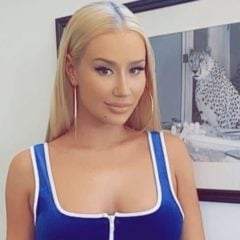