1.9k Views Comments Off on Tekashi 6ix9ine Goes All The Way To Times Square To Remind Us He’s Still King Of NY
Share
Advertisement

The self-proclaimed “King of New York” is out here making sure people know he runs the Big Apple. Rap rookie Tekashi 6ix9ine has hit up social media to send a friendly reminder to fans and critics alike of his New York City credentials.

Heading into the weekend, Tek lit up his Instagram page with a pic of himself in Manhattan’s Times Square.

This week, Tek credited rap star 50 Cent for giving him the extra courage to keep flexing his “King of New York” title.

Over the past few days, 50 Cent has flexed his support for the rap newcomer and urged critics to fall back on him.

Earlier in the week, 50 protégé Game fired off some ample trolling shots at Tek. 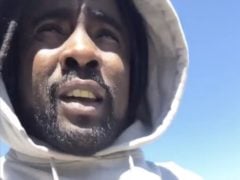