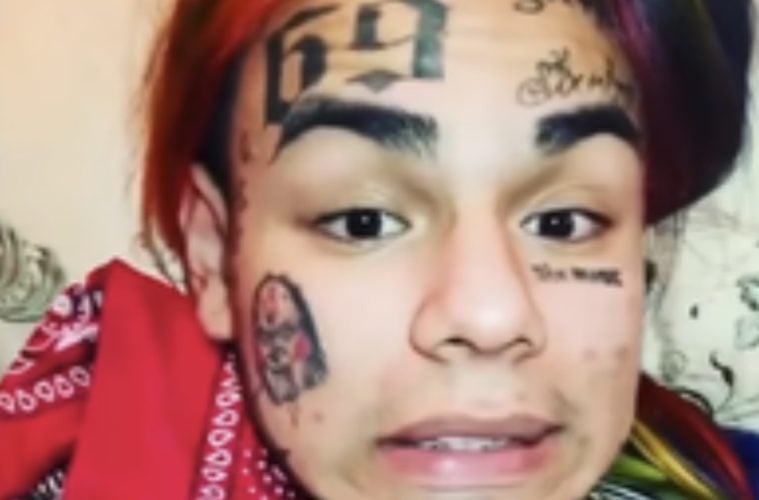 Tekashi 6ix9ine: 5 Things You (Probably) Didn’t Know About The Self-Proclaimed King Of NY

Tekashi 6ix9ine has emerged as one of hip-hop’s youngest and freshest names. Just 21 years old, the rapper whose real name is Daniel Hernandez, has released several hits and received tons of publicity already.

With the publicity being a great mix of positivity and negativity, he’s had beef with several stars, including J Prince, Casanova 2X, YG and recently with The Game. Tekashi was called out in a series of Instagram posts, to which he clapped back. Considering Tekashi is an outgoing and creative character, here are 5 Things You (Probably) Didn’t Know about him in light of his recent beefs.

1. He’s Had Some Disgusting Legal Trouble

His first charges came over 4 years ago, before he was an adult. Tekashi was busted for assault and the sale of heroin, but his troubles have continued. In 2015, he pleaded guilty to 3 counts of sexual misconduct with a minor and “use of a child in a sexual performance”. The minor was a 13-year old girl that he took sexually explicit pictures and videos with, many of which emerged online. 6ix9ine claimed she lied about her age, and also claimed he was 17 at the time everything happened. He also claimed it didn’t happen, something that probably didn’t help his case. Later a Snapchat video of Tekashi calling himself a “happy rapist” was posted, adding on to people’s distaste for him over the event. Trippie Redd even called him out, saying he doesn’t “promote pedophiles”.

2. Tekashi Is A Father

Shared with an unknown former girlfriend, Tekashi has one daughter. This is still unknown to many people, as he’s really only spoken or posted about her once. Her age, name, and literally everything else is unknown. The only time Tekashi was publically seen with the child was at her birthday party during one of his Instagram livestreams. A bystander also managed to capture the scene on video. Perhaps this is a good thing, though. Tekashi and his ex might purposely be avoiding the spotlight for the sake of the child.

Tekashi is still under fire from court for not completing high school or even being able to pass his GED test. Originally expelled in 8th grade for selling marijuana, he never returned to a classroom. He’s been trying to get his GED for several years now though, but claims to have trouble with the test. In late January, 6ix9ine’s attorney requested adjournment from Judge Felicia Mennin. Mennin was quoted to have said “What’s the problem? This case has been going on since 2015. One last chance,” and granted Tekashi one more try, but further affirmed that if he doesn’t next time, the punishment will be 3 years in prison.

Many of 6ix9ine’s social media posts involve him wearing red, with the most infamous spotting of this being the “Gummo” music video. The video, which has now garnered over 159 million views on YouTube, is basically a 3-minute Blood-fest. Tekashi has spoken of his ties and claimed allegiance to the infamous gang, but contradictingly has also been spotted with members of the rival Crips. Maybe he’s not really a member of either, but just poses for the clout. Either way, whatever he’s doing is working. So far, Tekashi has reeled in hundreds of millions of plays and just signed a deal with Birdman’s Rich Gang for $15 million.

His debut mixtape, ‘Day69’ dropped this year. Despite only having this tape to his name, Tekashi has also released plenty of hit singles. “Gummo” was certified Platinum by the RIAA and rose to the #12 spot on Billboard, and “Kooda” was able to hit #50 while being certified Gold. The mixtape ‘Day69’ saw similar success and debuted with 55,000 sales while reaching #4 on Billboard’s album rankings. The song “Billy” reached #50 as well, and seeing Tekashi on the charts is becoming a common trend.

Want to know the backstory of your fave celeb? Have a pitch I need to know about? Reach out below: