Talib Kweli Has “No Words” Over Shocking Pumpkinhead Passing: “We Went To PS 282 Together”

Music veteran Talib Kweli has come forward to shed some thoughts on the shocking passing of rapper Pumpkinhead this week.

Kweli took to his Instagram page to reflect on the rapper’s legacy and revealed their childhood years together. 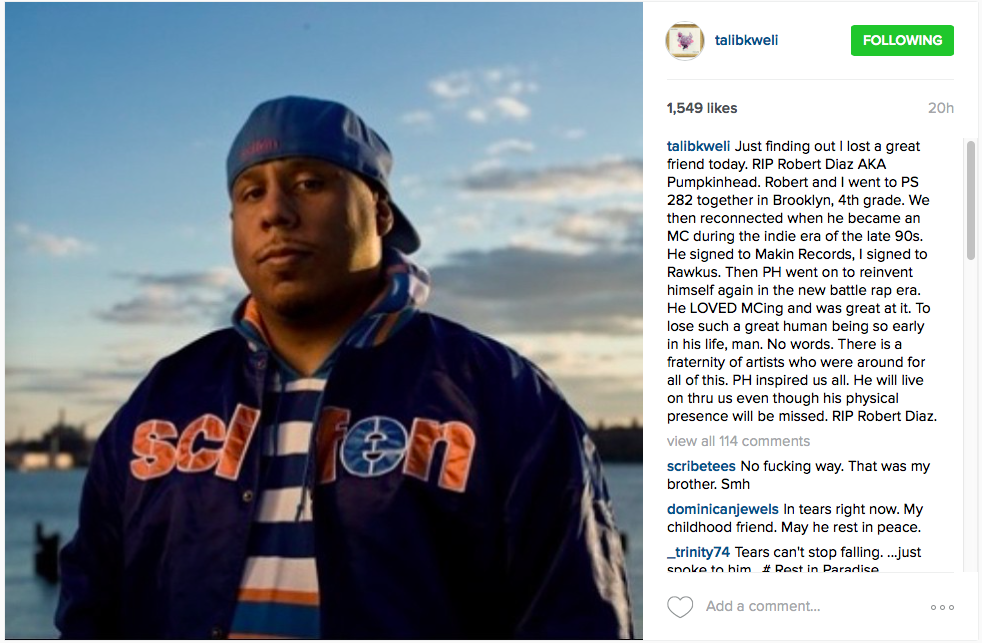 The cause of death is unknown, though the rapper had been admitted to a New Jersey hospital earlier this week for minor surgery. The rapper’s death was confirmed to Rolling Stone by Graeme “GMS” Sibirsky, the co-founder of Diaz’s label MCMI Records. (Rolling Stone)

Today is a very shitty day. Just got word my brother Pumpkinhead passed away at 5:40am this morning. My condolences to his family…R.I.P.

One of the first people to give me a shot when I moved to New York and I'm honored to have recorded "Orange Moon Over Brooklyn" with you.

Pumpkinhead broke through with his 1997 single “Dynamic,” which he followed with four solo albums. He most recently dropped Know the Ledge in 2011. In addition, he appeared on tracks from Jean Grae and Immortal Technique. He was also a respected battle rapper. (Exclaim!)