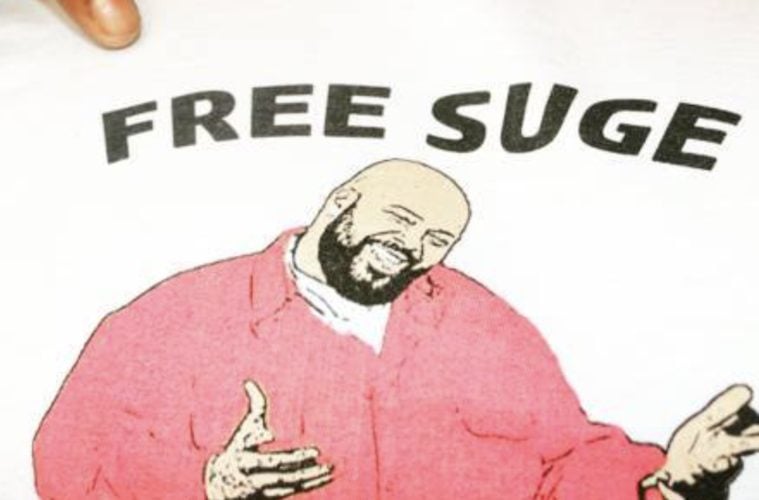 According to reports, a threat from Chris’ legal muscle ultimately forced Suge to look the other way in a publicized nightclub shooting suit.

Suge had sued Chris over a shooting in 2014 at 1 OAK nightclub in WeHo. Suge was shot 7 times. He filed a lawsuit against 1 OAK and Chris, who was performing when shots rang out. Suge believed security was woefully lacking, which allowed the gunman to fire multiple shots. We’ve learned Chris’ lawyers from the law firm of Geragos & Geragos fired off a nasty letter to Suge and his legal team, saying Suge’s case was a certain loser and when it was thrown out Chris would counterpunch with a malicious prosecution lawsuit. (TMZ)

Back in August, buzz developed about Suge allegedly trying to bribe a murder case witness.

Suge Knight and his attorney Matthew Fletcher are accused of attempting to orchestrate witness bribery ahead of the rap mogul’s murder trial, prosecutors revealed Wednesday. The Los Angeles County district attorney’s office based the allegations on a series of prison phone calls between Knight and his lawyer. (Rolling Stone)

Despite the headline-generating drama, Knight’s attorney denied the accusations.

Prosecutors are making the blockbuster claim Suge Knight tried to buy witnesses in his murder case — but one of the rap mogul’s lawyers denied the theory Thursday. “I’ve never paid anyone, period, end of story,” lawyer Matt Fletcher told the Daily News. “As far as I know, (witnesses) haven’t been paid by anyone,” he said. “I don’t believe Suge Knight has the money to pay anyone.” (NY Daily News)

Reports claim the bribery talk stemmed from 2015 calls between Suge and his lawyer.

Talk of bribery came in a series of recorded calls in 2015 between Knight, who was in jail, and his attorney Matthew Fletcher along with Knight’s fiancee and his business partner. Knight, whose Death Row Records made household names of Dr. Dre, Snoop Dogg and Tupac Shakur, is charged with running his truck into two men, one of whom died, in 2015 outside a Compton burger stand after an argument on the set of the movie Straight Outta Compton. (Billboard)