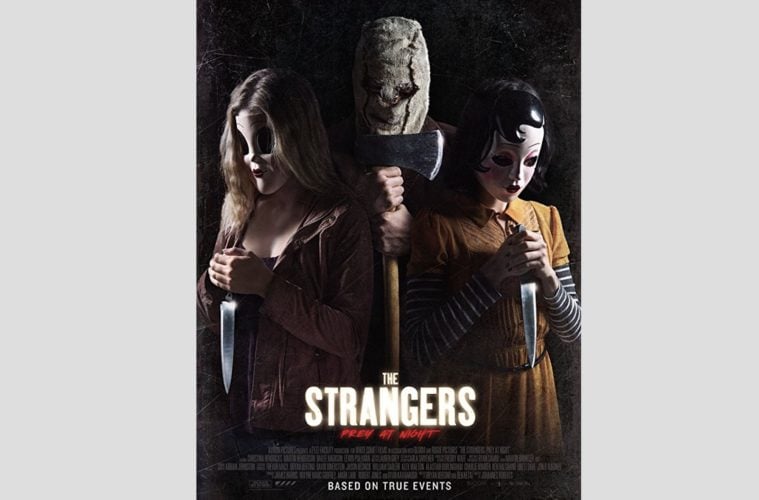 The Strangers: Prey At Night: “If You Enjoy The Horror Genre, Check This One Out”

The sequel to the highly successful predecessor is closing in on us. The Strangers was one of the creepiest movies I’ve ever seen. What made it so damn scary was the fact, it could happen to anyone, anywhere, “just because you were home.” That line alone is scary all on its own. So, to pay homage to these masked strangers and to add a little twist to the “5 Reasons You Should” go see Strangers: Prey At Night this Friday, March 9 I’ve put together the top 5 best masked serial killers in movie history.

Let’s count them down. Now, remember, this is my list and would love to hear what you think or even how/why you disagree with me. Let’s do this! [Be sure to read each reason and grab your exclusive screening passes right now!]

Leather face has always been a fun look at the masked killer. I mean dude runs around with a chainsaw. He’s never come across anyone he couldn’t walk down with that thing. Both new and old versions of Leather-face were complete opposites, but both followed the same mold as gruesome as possible. He’s for sure one of the best masked killers in the slasher/horror genre.

Jigsaw made the list because he never actually killed these people. The genius behind Jigsaw is he makes you do it to yourself. I’ll be honest, didn’t see the most recent Saw movie. I always enjoyed him as a villain in the sense he took and made you evaluate how much do you appreciate and want to continue living your life at any cost. He wanted you to get out of the game and live with your life with a new appreciation for it. Hence why he was so good, and scary as hell as a masked killer. Setting the tone for newer serial killer movies.

This one still to this day is my favorite masked serial killer duo of all time. Billy and Stu were the best in the sense they used everything they learned from serial killer movies and applied them to ‘real life.’ The best thing about them was not having a real motive (except billy). They knew the rules to survive the horror movie even though they were themselves the killers. Just a dope concept for how something as simple as a mask, a knife, and “going a little mad sometimes” can keep you on the edge of your seat.

This one was a toss up between my number one choice. Michael Myers would stalk and stalk and then next thing you know, you’re trapped in a closet and getting cut up with a huge knife. Michael Myers never spoke, and that added to the fear he imposed on all those babysitters. Michael Myers had borderline super strength to push through anything and everything. You just couldn’t kill the guy. Why do you think there are so many movies. He’s just a brute force type serial killer, and that ghost mask made him that much more terrifying.

I’m pretty sure you knew he was going to be number 1. I wanted to pull someone you’ve never heard of, but i’m pretty sure you wouldn’t have bought that at all. Jason, didn’t even show up in his own movie series until the sequel. Remember he was the kid at the end of the movie on the lake. Jason, was the best because he never had a go to weapon. I remember one movie he got someone with a metal edged weed whacker. Just hilarious some of the weapons he would come out there with on the lake. Plus, Jason had a reason for killing all those people. It was his lake. Why continue to go there if you know people are being killed by this guy?

The Strangers: Prey at Night comes out Friday. I’m pretty excited for it to be honest with you. I enjoy a good psychological thriller and this one looks to fit that mold again. This movie inspired this masked killer list right here. If you enjoy the horror genre, check this one out for sure. Anyone in a movie whose logic is simply ‘because you were home’ has my attention for sure. Let’s hope they can recreate as good a story as the first one.

Grab your screening passes below!