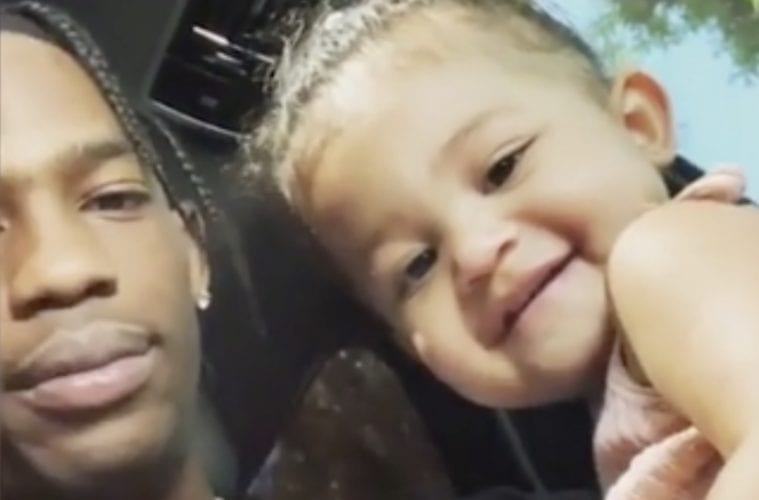 Houston rap star Travis Scott keeps his daughter laced. With a Nike deal of his own he’s making sure his mini-me Stormi Webster regularly has serious heat on her feet.

Travis jumped onto Instagram over the weekend to share a pic of himself clocking in daddy-daughter time as well as a flick of her closet. Stormi Webster owns a pair of her father’s Cactus Jack Air Force 1’s as well among her sneakers stash.

The Houston native recently shared some pictures of himself somewhere out in the countryside with Stormi. Several days ago, Travis went to Instagram to post a slideshow of shots.

The Houston rapper’s bae Kylie Jenner recently made headlines for the worst reasons. Some reports claimed the curvy reality TV star might have forged tax returns and isn’t a real billionaire. According to reports, Kylie Jenner might not have made it to billionaire status in 2020. Fresh details claim specific tax documents suggest she’s overvalued.

Jenner, now 22, was named last year by Forbes as “The Youngest Self-Made Billionaire Ever.” Jenner had made millions from her company, Kylie Cosmetics, which she later sold a 51% stake to the beauty company Coty in a deal that valued her company at $1.2 billion. But, Forbes’ Chase Peterson-Withorn and Madeline Berg reported this week that Jenner and her mother, Kris Jenner, inflated their wealth in documents they provided to the publication about Kylie’s personal wealth and her company’s revenue. (Business Insider)

Financial publication Forbes believed Kylie hasn’t kept things 100 for years. It speculates her team didn’t tell the truth about how much her brand has made on an annual basis.

The business was never that big to begin with, and the Jenners have lied about it every year since 2016—including having their accountant draft tax returns with false numbers—to help juice Forbes’ estimates of Kylie’s earnings and net worth. While we can’t prove that those documents were fake (though it’s likely), it’s clear that Kylie’s camp has been lying. (Forbes)