Stitches Gets The Scariest But Most Adorable Face Tat Ever

Florida rapper Stitches keeps going viral for all of the wrong reasons. The hip-hop newcomer has paid homage to his son by a jaw-dropping new face tattoo.

Stit went to social media and showed off his latest ink job. 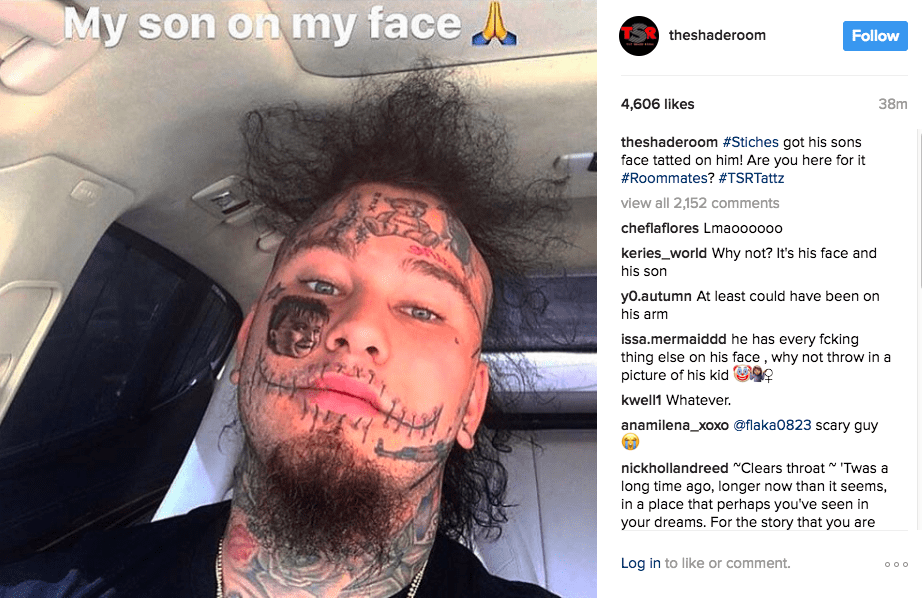 Earlier this week, the rapper sparked headlines for allegedly tricking viral star Danielle “Cash Me Outside” Bregoli into appearing in a new music video.

Danielle and the friend did go over and she recorded a song and music vid with Stitches. Her team says she was uncomfortable while shooting, although it doesn’t seem like it in social media clips. Danielle’s reps feel Stitches exploited her fame without consent from her mom or management. The rep says, “Stitches is a scumbag. He tricked a child into his van by offering her candy.” (TMZ)

Stit almost immediately clapped back and denied any wrongdoing on his end.

Stitches adamantly denies that through his rep, who says there was no money or contract involved, and Danielle wanted to be on the track. We’re told Stitches wants the best for her, and only wanted to be a positive mentor. (TMZ)

“Listen up, I want all my fans to go to Taylor Swift’s page and write, ‘Go listen to Stitches new ‘I Don’t Want To Live Forever’ remix. And listen up Taylor, I’m with ya baby. Next time I see Kanye West, I’m gonna knock him the f*ck out for you. Yeah, I promise that and after that, I’m gonna lick your a**. Yeah, you can come. Ex-drug dealer and we can have a drug-dealing baby. You know what I’m saying? Yeah. I love all of Taylor Swift’s fans. I love Taylor Swift too. Ooouuu. Taylor, Taylor, Taylor, thank God they made ya. It’s time to have a baby.”