Stitches Drops “Death” Diss Track On Game: “You A Stupid N*gga If You Think This Beef’s Done” [Audio]

On the track, Stit references his now-infamous altercation with Game from last week.

Stit revealed what serious injury he suffered in one of his eyes on Instagram this week. 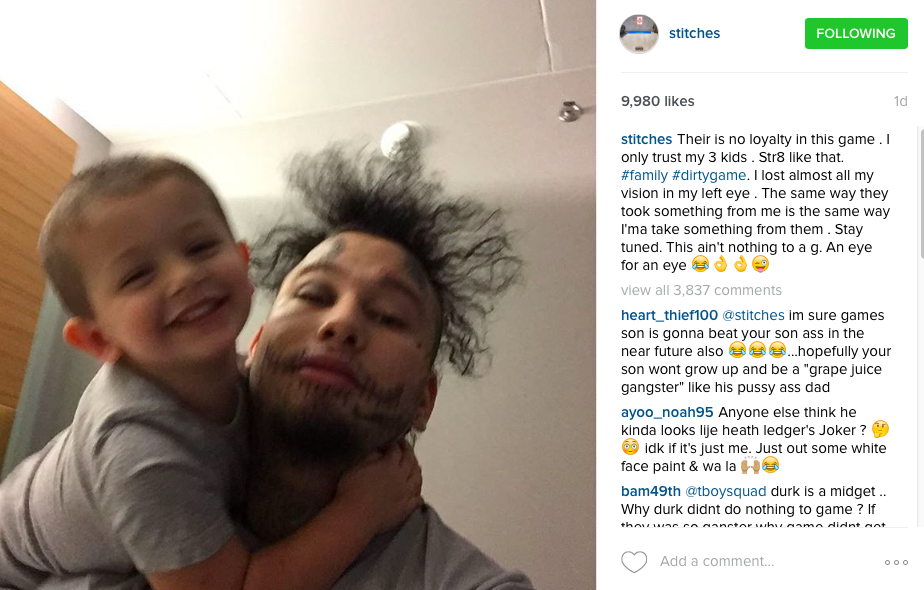 Earlier this week, he tried to expose Game for using someone else’s pictures on his Instagram page. Stit released some new video footage of himself assuring concerned fans of his condition Sunday (December 6).

#PressPlay: Can #Stitches just take the L and go ice his face or something ?? #TheGame

My face is fractured right now I can't see out one eye . That's all you could pay them niggas to do to me hahahahahahabaha. This ain't nothing . You can shoot me next and I'll still laugh. At the end of the day everyone knows you were scared to walk up that day . Everyone knows when you were hitting 40 glock ur boys had guns pointed at him. And everyone knows you been knocked out cold 2 times once in the mall and once in France . Show everyone you a Gangsta and let's step in the ring . A man to man fight . Even if you loose I'll give you the props for being a man . Let me know the city and time and I'll be out there pussy. Stop paying people for protection. Anybody who wants to see this tag him. @losangelesconfidential punk hoe. And to all my real fans who rocking wit me I love all y'all . This shit don't make me or break me. And stop paying people to make fake shit up about me. Your gonna be broke by the time I'm dead ????? #SuckaPunch #TellYourBoysToProtectYourBitchAss #Pussy #hoe #CantRunA1on1YouScaredAss #DontWorryIllCatchYouSlippin #noballs #stripper #lilbitch #imreadywhenyoumanup #tmigang #fuckajob #hidebehindthemagain #walkbackpussy #purepussy. And yeah my squad didn't do shit that day they know not to get involved in a 1 on 1 . I walked up myself like a real nigga does . I didn't even see you take a baby step towards me.