Stacey Dash Rips Obama After Orlando Massacre: “This Atrocity Would Not Go Unanswered Under President Trump” 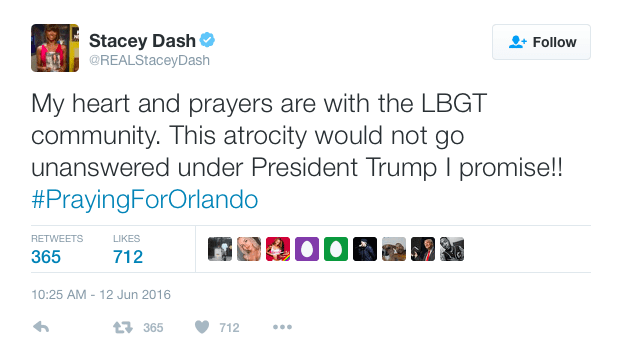 Donald Trump made sure to also publicly lash out at President Obama.

Horrific incident in FL. Praying for all the victims & their families. When will this stop? When will we get tough, smart & vigilant?

Appreciate the congrats for being right on radical Islamic terrorism, I don't want congrats, I want toughness & vigilance. We must be smart!

Is President Obama going to finally mention the words radical Islamic terrorism? If he doesn't he should immediately resign in disgrace!

What has happened in Orlando is just the beginning. Our leadership is weak and ineffective. I called it and asked for the ban. Must be tough

Democratic presidential candidate Hillary Clinton has sent her prayers to the victims.

Woke up to hear the devastating news from FL. As we wait for more information, my thoughts are with those affected by this horrific act. -H

An American-born man who’d pledged allegiance to ISIS gunned down 50 people early Sunday at a gay nightclub in Orlando — the deadliest mass shooting in the United States and the nation’s worst terror attack since 911, authorities said. The gunman, Omar Mateen, 29, of Fort Pierce, Florida, was interviewed by the FBI in 2013 and 2014 but was not found to be a threat, the FBI said.