“You’ve just seen the perfect example of a HOLLYWOOD plantation slave! Sorry, Mr Williams. But the fact that you were standing on that stage at THOSE awards tells people you really don’t know what your talking about. Just spewing hate and anger.
Because you my man are just like everyone else hustling to get money. But your cognitive dissidents has you getting it from THAT BYSTANDER whom YOU DONT NEED. Yes. BLACK ENTERTAINMENT TELEVISION is WHITE OWNED. GET over yourself and get on with it!” (Patheos)

Stacey also told Jesse he should get over his personal issues and to avoid pro-Black networks like BET.

“That chip on the shoulders of people like you will weigh you down and keep you from flying free. But true freedom is never free. You have to know how to fly. If anyone is making you feel this way its you. Living in a psychological prison of your own making. If anyone is GHETTO-IZING anyone, it’s people like you letting the BETs and other media outlets portray us in stereotypes.” (Patheos) 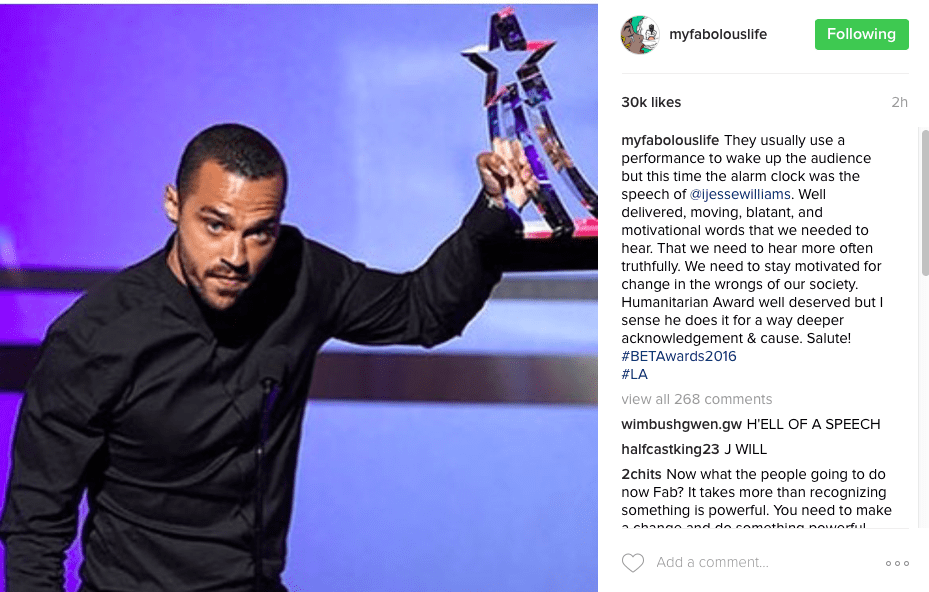 Williams used his Humanitarian Award speech to speak on social inequality in America.

“Now this is – for the Black women in particular who have spent their lifetimes dedicated to nurturing everyone before themselves. We can and will do better for you,” Williams said. “Yesterday would’ve been young Tamir Rice’s 14th birthday. So, I don’t want to hear anymore about how far we’ve come when paid public servants can pull a drive-by on a 12-year-old playing alone in a park in broad daylight, killing him on television, and then going home to make a sandwich.”