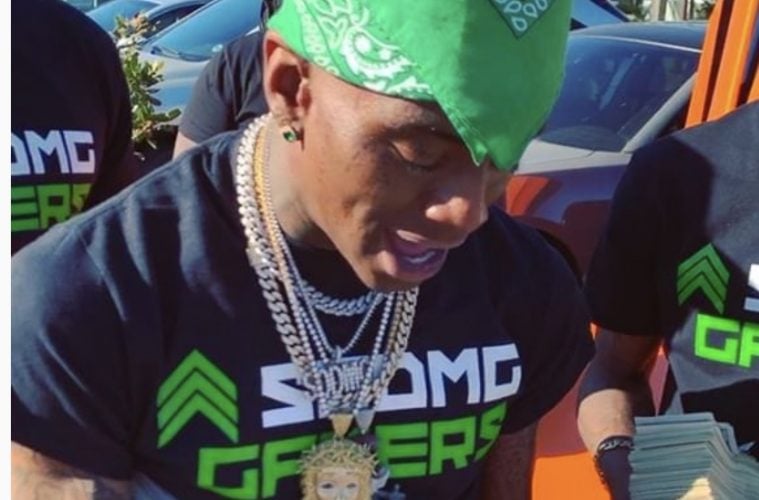 Atlanta rapper Soulja Boy is out here proving it takes much more than an arrest to keep him from leveling up. The hip-hop star bounced back from a headline-generating Friday arrest for a possible probation violation.

On Saturday, SB hit up Instagram to flex and joke about landing a multi-million dollar deal with the Los Angeles Clippers.

He was released just after noon PST, according to the LASD website. Later Friday, the rapper posted a profanity-laced live Instagram video to update his fans. “Yeah, I’m out… I just got out of jail right now and I’m performing at the Clippers game,” he said, while sitting in the passenger seat of a car. “Tell you, this (expletive) ain’t going to start… I had the biggest comeback of 2018 and they try to lock me up, they try to hate on me…I’m the hottest rapper in the game.” (USA Today)

Yesterday, reports went viral about SB landing in handcuffs for a probation violation.

Soulja went to see his probation officer Friday morning in the San Fernando Valley, and when he showed up he was cuffed and taken to jail. Soulja is currently on probation and the offenses go back 8 years … when he was convicted of weapons violations. In 2016, while he was on probation, cops descended on his home after the rapper threatened people online. During their search, cops found at least one weapon, which was a violation of Soulja’s probation. (TMZ)

The hip-hop heavyweight’s legal woes and probation date back to late 2014.

Soulja Boy’s probation violation stems from a December 2014 conviction for carrying a loaded firearm in public. He was sentenced to 24 months of probation, which he was arrested for violating in December 2016 after police said they found a gun in his home. The next month, Soulja Boy was charged with two felonies and one misdemeanor stemming from the arrest. In March 2017, he was convicted on one of the felonies and given five years of probation. (Pitchfork)