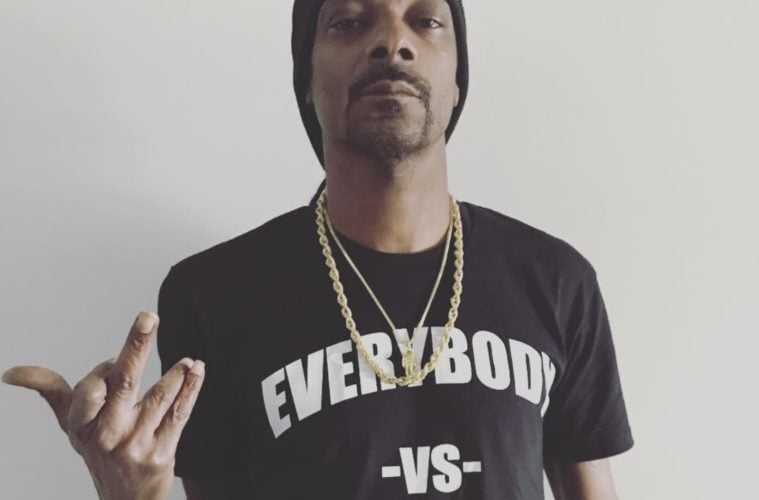 Snoop Dizzle hopped on Instagram Tuesday (October 17) to give a take on Trump’s latest headline.

In a new interview, rap star Kendrick Lamar shared his issues with Trump.

“The key differences [between Obama and Trump] are morals, dignity, principles, common sense,” he says. Where Obama was an inspiration, it’s hard for him to even respect Trump. “How can you follow someone who doesn’t know how to approach someone or speak to them kindly and with compassion and sensitivity?” But ultimately the rise of Trump has brought out something new in Kendrick. “It’s just building up the fire in me. It builds the fire for me to keep pushing as hard as I want to push.” (i-D)

My buddy @marcanthony discussing ways to help Puerto Rico…. I told him yeah & im gon need your help getting this tangerine man outta the White House… he getting his Cheetos prints all over everything. Lol #somosunavoz

“I believe that everything that happens in life happens is for your greatest good. I don’t think that this is happening if we weren’t prepared to handle it. So I’m just actually looking forward to what happens next after that because usually when things are darkest then light is on its way. I’m not fearful. I believe that we’re resilient. We’ve been, especially us as black people and especially the culture, we’ve been through so much more than this guy. This guy, I’m looking at him like, ‘Man, this is a joke.’ I can’t even say with all due respect, with all disrespect [laughs] um, yeah, I just think that he’s not a very sophisticated man especially when it comes to the ideas of, until everyone’s free, no one’s free. That’s just a fact. We are all linked some kind of way. You oppress a certain type of people, we’re all in danger – because if I’m being oppressed and you have this nice mansion – I’m coming inside there. That’s going to happen. That’s just how life is. On just a practical level that just makes sense.” (BBC Radio 1)