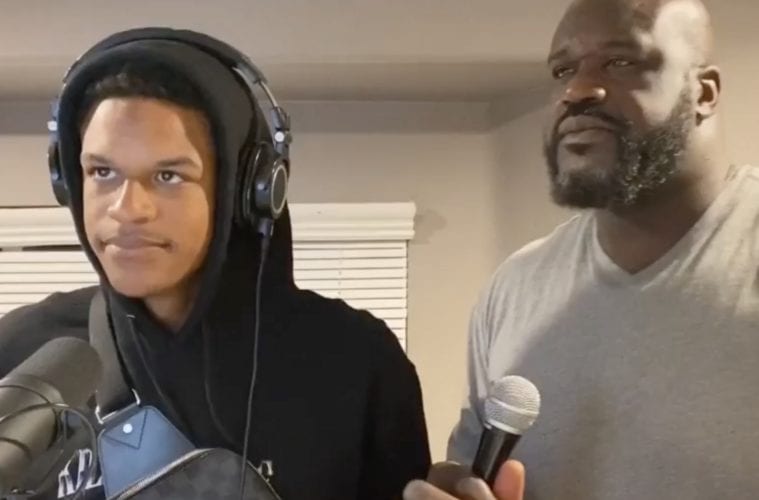 NBA legend Shaquille O’Neal is a man of many talents. Over the weekend, he went online with a new video of himself turning daddy duties into an epic studio session with his son.

On Sunday night Shaq and his mini-me Shareef, who plays basketball at Louisiana State University, recorded straight fire. They both spit verses while Shaq made sure to pay tribute to the late Big Pun and send love to his friend Fat Joe.

Shaq’s debut studio album, Shaq Diesel, has been certified Platinum by the RIAA. It was released in 1993 and peaked at #25 on the Billboard 200.

He also had 3 other EPs debut on Billboard, with Respect reaching #58 on the chart. Shaq most recently released “Bang” with NGHTMARE and Lil Jon in 2019.

New York rapper Lil’ Kim has some high-profile celebrity friends. The hip-hop star went online earlier in July 2020 to share a hilarious birthday shout-out from her longtime friend and retired NBA icon Shaq. The Queen Bee hit up Instagram with some must-see footage. The Brooklyn native saluted Shaq Diesel and credited him for putting together the best born day shout-out.

“😂😂😂😂😂😂 omg I love this so much!! It’s the cutest, funniest thing!! I’ve known you for a long time and you’re still the same fun-loving person. This has to be one of the best birthday shoutouts I’ve ever gotten 😂😂. YOU ARE A NUT!! 😂😂😂 You definitely won the birthday shout outs this year @shaq and I got some good ones too! Thank you everyone for the lovely birthday shouts. Love U all 💛” -Lil’ Kim’s Instagram

“This birthday was extra special ❤️ Thank you so much @prettylittlething and @umarkamani you’re the best!! This cake is EVERYTHING 😍 #prettylittlething” -Lil’ Kim’s Instagram