Sha Money XL Responds To 50 Cent’s Shots: “This Haitian N*gga Is Not Afraid Of That Clown” [Video]

Former G-Unit president Sha Money XL has come forward to speak out on dicey remarks rap star 50 Cent fired off at him recently.

In a series of Twitter posts, Sha defended his image and went at Fif’s head Monday (August 24). 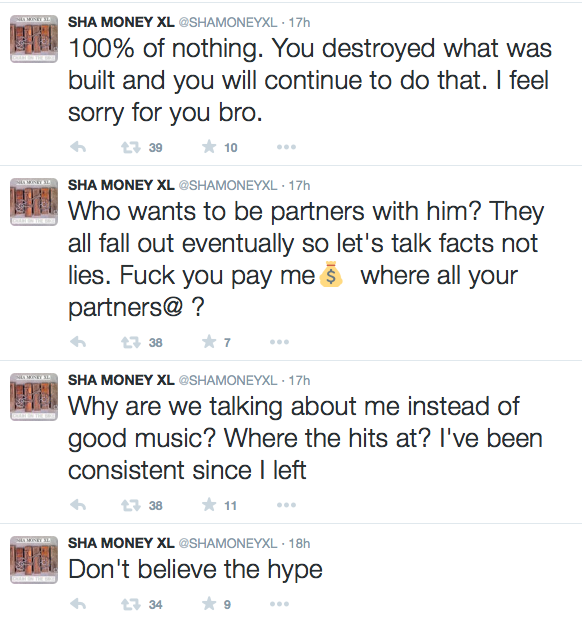 “I offered him overhead, so he can have his own office space and build a staff for Money Management and all that s**t. He never was with that, so he never did anything. Next thing you know, he called and he was looking for my blessings and he was taking a job over at Def Jam.” (YouTube)

Back in 2011, G-Unit member Tony Yayo spoke out on Sha Money XL talking about ex-affiliate Game.

“I heard Sha Money [XL] say he’ll work with Game,” Yayo explained in an interview. “After all the money the n*gga’s done f*cked up, you’re going to work with this guy? But I’m a real n*gga, see, my thing is loyalty and being honest and being real. My whole situation with Game and [Young] Buck — it’s more me being mad, like ‘Why f*ck up the money?’ If we’re all in the business — why would y’all f*ck up the money? It just don’t make sense. Game, I talked to this n*gga on the phone. His album dropped , like ‘Yo, congratulations’…we wre like the motherf*cking Beatles…Sha Money’s my n*gga, but why even work with somebody that says, ‘F*ck G-Unit,’ after what we just built? Why build up a brand to destroy it?” (This Is 50 Radio)

In April 2011, Sha discussed his feelings toward Game and explained why the West Coast emcee needed support from the Unit.

“Game is cool, I think he just needs me,” Sha said in an interview with radio host EI8HT. “I gave him ‘Hate It Or Love It,’ I gave him that record. He needs 50 [Cent], he needs us, he needs a Unit. And you see he tried to make a play to get back to us. I hand delivered that record, ‘Hate It Or Love It,’ so he just needs that banger and he’ll be all right. He can rap but he needs to stop shouting out so many names in the songs and just rap. He’s got that sh*t. He comes with it, but, he’s like Nas, they don’t pick the right beats sometimes.” (“Street Disciplez Radio”)