Reggae singer Sean Kingston‘s legal muscle has stepped forward. An attorney for the pop star has shot down claims by rap rival Game about him going to law enforcement and singling him out over a recent robbery.

According to the lawyer, Kingston never mentioned Game’s name in his police report.

This whole beef started when Sean got his $300k chain snatched at an L.A. club — Game insists Sean told cops he was involved, but attorney Michelle Iarusso tells TMZ that’s not how it went down. “At no time did my client bring up The Game during the investigation. In fact, [Sean], to date, has not even spoken to any member of the LAPD regarding this incident.” TMZ obtained a copy of the police report … and Game isn’t mentioned. (TMZ)

This past weekend, Los Angeles Lakers’ Nick Young denied having any involvement in the Kingston and Game dispute. 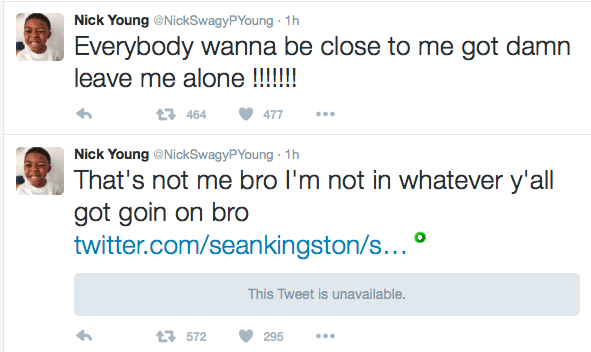 Hours prior, Kingston posted up a screenshot allegedly showing off Nick calling out the rap veteran.

#PressPlay: This tew much 😩 #SeanKingston vs #TheGame Pt.3

#PressPlay: #SeanKingston has some more to say 😩 #TheGame

Game almost immediately responded to Kingston and revealed where their issues stemmed from.