Asked about the possibility of joining Team Apple, Sage said it would take a few big stacks.

“If I get Drake money, I’ll release it for free,” Sage said when asked if he would release his next album through Apple Music. “I would love to have a role on either show, [‘Power’ or ‘Empire.’] They both are great shows and I think I could give an Emmy award winning performance.” (Soo Detroit)

Apple Music teamed up with hip-hop stars Pharrell Williams and Eminem for its launch.

The launch of Apple Music on June 30 will be marked by an exclusive Pharrell Williams single and an interview with Eminem on Beats 1 radio. In response to Tidal and the exclusive content it offers customers, Apple has announced that the Pharrell Williams single, Freedom, will only be available through the Apple Music streaming service. (What Hi Fi?)

My first interview for #beats1 @eminem Next week on @applemusic

Odd Future’s Tyler, the Creator, who is known for his public outbursts, sent an open warning toward Apple enthusiasts last month. 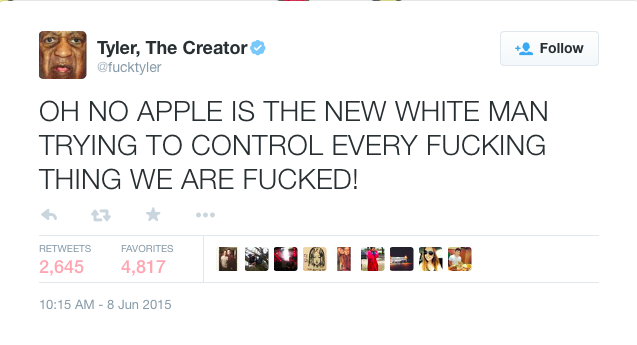 Today at the Apple Worldwide Developers Conference in San Francisco, the announcement was made that Apple has streamlined its music app to combine streaming, downloads, and radio all in one place. There’s also a social media element, Connect, which was introduced with a presentation by Drake. The Weeknd closed out the presentation by performing a new song, “Can’t Feel My Face”. (Pitchfork)