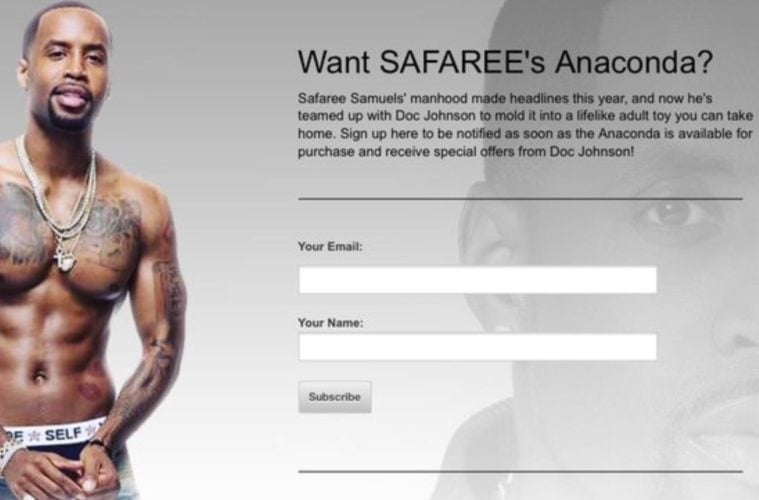 “Love & Hip Hop” star Safaree Samuels is breaking new ground for his career and really getting hyped for his new sex toy’s development. The rap newcomer has updated fans on what’s to come.

Jokes on you 😝 Thank you @TheOriginalDoc and my team! Thank you to my fans & supporters. God is the greatest 🙏🏾 #Stuntgang lit https://t.co/v8SR1RMHue

Hey @TheOriginalDoc they're going crazy for the pre orders already 😩😩😂😂🙏🏾🙏🏾! Wow! This mold is gonna be hard!!!! Literally 😂😂😂 pic.twitter.com/ojZlOVAmBG

Earlier in the day, Safaree hit up social media to confirm his major power move.

In the most serious way possible, hard work pays off, 📸 @IAMSAFAREE lol CONGRATS FAM!!! Jokes aside – you deserve it. God always looks out! Keep winning! pic.twitter.com/b9LCtTRi3a

According to reports, Safaree secured a million-dollar deal with a top sex toy company.

The anaconda Nicki Minaj ﻿was allegedly obsessed with — on and off for 12 years landed Safaree a 7-figure deal with one of the top sex toy makers, Doc Johnson … which proudly boasts of its 40 years in the quality, hand-crafted sex toy game. The deal calls for Doc Johnson to create a life-sized mold of Safaree’s manhood. DJ will soon begin mass production, but don’t whip out your credit card just yet …ya gotta wait a tad longer. Pre-orders begin in December, and the toys will ship just in time for Valentine’s Day. (TMZ)