Russell Simmons To Bill Clinton: “U Owe The Black Community An Apology”

Music mogul Russell Simmons is going after President Bill Clinton this week following dicey remarks he made about the Black Lives Matter movement during a campaign appearance.

Simmons took to his Twitter page to demand President Clinton to cough up an apology Friday (April 8). 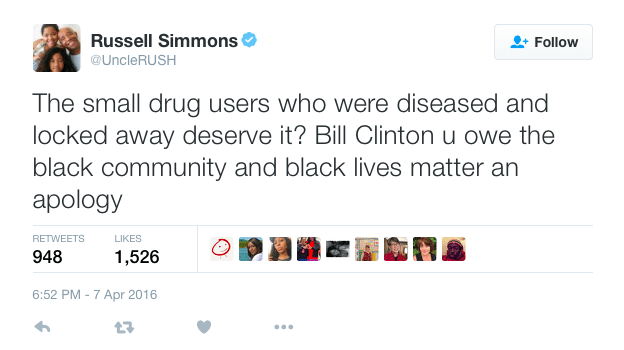 Check out President Clinton’s remarks on the next page…

.@BillClinton to protesters: You're "defending the people who kill the lives you say matter" https://t.co/3900s5sWFP https://t.co/SQtQnx8w7n

President Clinton caught heat for weighing in with his personal thoughts on the Black Lives Matter movement during a Thursday (April 7) event for presidential hopeful Hillary Clinton.

“I don’t know how you would characterize the gang leaders who got 13-year-old kids hopped up on crack and sent them out onto the street to murder other African-American children,” Clinton said, addressing a protester who appeared to interrupt him repeatedly. “Maybe you thought they were good citizens …. You are defending the people who kill the lives you say matter. Tell the truth. You are defending the people who cause young people to go out and take guns.” (NPR)

Simmons is known for joining in on public protests ranging from Black Lives Matter to Occupy Wall Street.

Simmons has long been an outspoken supporter of the Black Lives Matter movement. In December 2014, he joined thousands of protesters in the “Millions March NYC” event to speak out against police brutality. Just days before the Oscars last February, the business mogul’s emerging video programming brand All Def Digital hosted the first-ever All Def Movie Awards. (The Wrap)