According to Simmons, she penned an untitled track for the Bawse.

Back in April, rap veteran Ice Cube spoke out on his issues with Sophie’s dad for calling on hip-hop’s death.

“I got a lot of respect for Gene Simmons. I actually met him a few times and he seemed pretty cool but I just think he’s wrong on this,” Cube said to radio host Howard Stern. “Gene hit ‘me’ up on Twitter – everybody’s got their own opinions. Gene, he’s an OG in the game but he’s just wrong in this. It’s a spirit and it’s been going on before they called it rock n roll. [Who’d win in a fight?] I got that Tyson inside game but nah, nah, like I said, he’s an OG and I have a lot of respect for him but I just think he’s wrong on this. But I understand the attitude.” (“The Howard Stern Show”)

In April, Simmons and Ice Cube went at each other briefly on Twitter.

@genesimmons I repeat. And say this with a Kiss. pic.twitter.com/ILKaRWrvxX

Cube – I stand by my words. Respect NWA, but when Led Zep gets into Rap Hall of Fame, I will agree with your point. https://t.co/CQUoJwhZJb 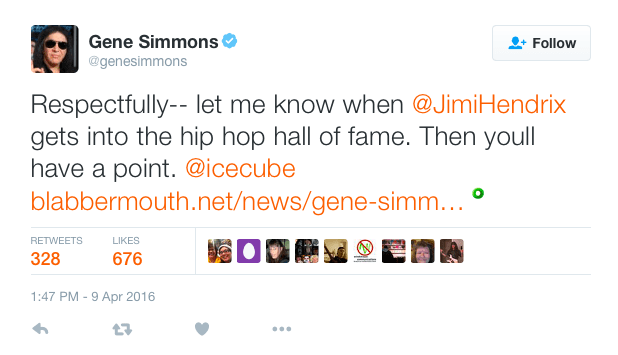