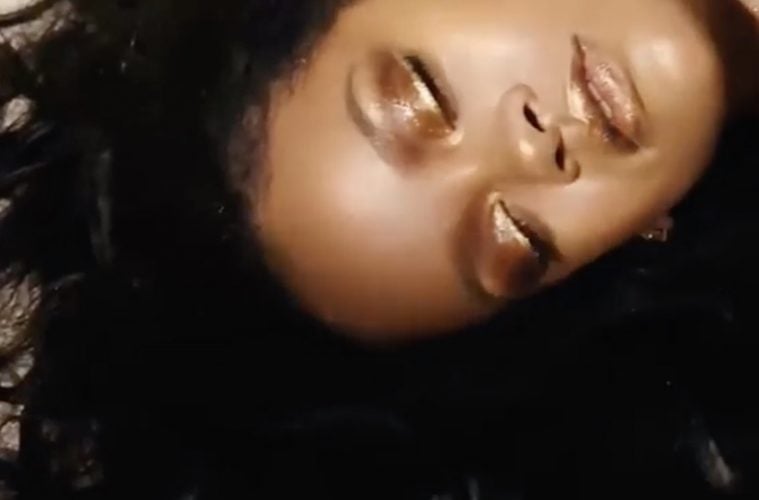 Rihanna Says Wait’s Over For Her Trophy Wife Lovers

Grammy-winning singer Rihanna is on her cosmetics grind. The Barbados beauty has announced the release of her new Body Lava makeup line.

#BodyLava is back and a new shade has joined the family…for all my #TROPHYWIFE lovers, get your liquid gold TONIGHT at midnight PST @fentybeauty

Hours prior, the Roc Nation princess showed off a new modeling shot.

Back with that new DRIP! The return of @fentybeauty #BODYLAVA is coming in a new , yet signature, shade #TROPHYWIFE !!! 1 of 3 limited edition shades, including #WhoNeedsClothes and #BrownSugar … all available TONIGHT at MIDNIGHT, PST….. VISIT ‪fentybeauty.com‬, @Sephora @harveynichols, and #SephorainJCP ✨✨✨

Bringing back that drip! Y’all have been asking and now it’s coming! The return of #BODYLAVA is coming TOMORROW, March 21st, for a limited time only! A NEW iconic shade in #TROPHYWIFE, inspired by our shimmering gold #KILLAWATT ✨, along with the OG faves, #WHONEEDSCLOTHES, and #BROWNSUGAR, all in the same dewy high-shine finish. Get it when it drops at fentybeauty.com, @sephora, @harveynichols, and #SephorainJCP!

“Angel” peaked at number 67 on the Apple iTunes chart and was released under the name “Fenty Fantasia.” The release was deleted a few hours later, some of the songs had previously been released online, some of the songs were ten years old. Fans began to reach out to Rihanna over social media to inquire about the release, Rihanna simply replied, “S___s Crazy.” (Real 92.3)

A source exclusively told Page Six that the meeting seemed like a “business lunch.” We’re further told the talented duo were overheard talking about “music and what they can do together.” It wouldn’t be the first time they’ve joined forces. Jay-Z was the first to sign Rihanna in 2004, when he was president of Def Jam, and he’s been featured on her hits “Umbrella” and “Talk That Talk,” while she sang on his 2009 smash “Run This Town.” (Page Six)