Grammy-winning singer Rihanna has reportedly decided not to rock with rap star Kanye West on the production side of her long-awaited ANTI album. 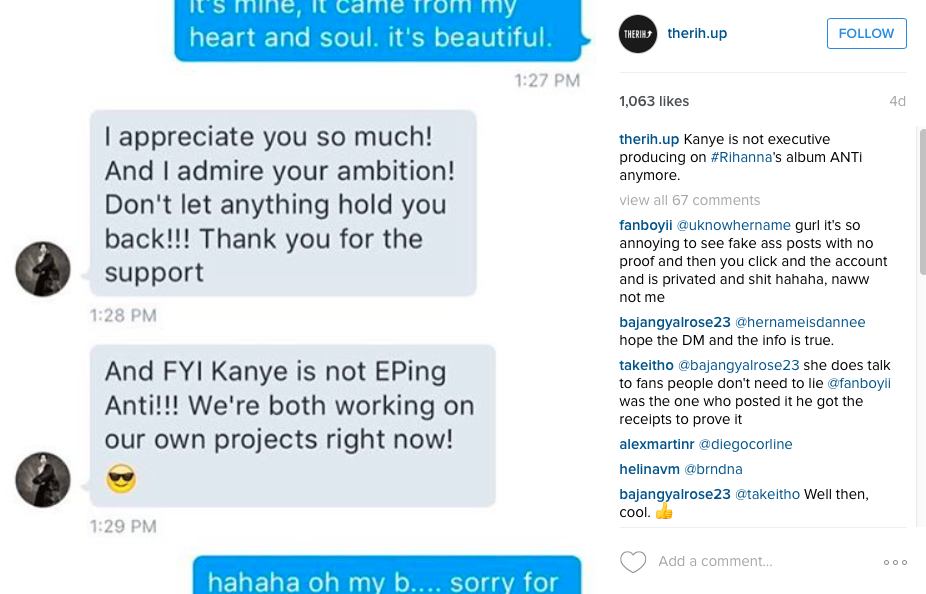 Check out some recent Rihanna album rumors on the next page…

Recent reports suggested Rihanna and rap star Drake could have new albums coming out next month.

Word has it that in addition to Kanye West—who has tweeted a 2/11 release date for his forthcoming Def Jam set, Swish—we will see long-awaited new sets from YMCMB/Republic’s Drake and Roc Nation’s Rihanna around Grammy time as well. When will the latter two superstars deliver to get maximum Grammy bang? (HITS Daily Double)

According to reports, the one-time couple were spotted a few weeks ago for a new video.

A few Internet detectives have rounded up some clues that point to an upcoming collaboration between the singer and Drake, who she allegedly shot a music video with on Saturday (Jan. 9). The track, titled “Work” if the calculations are correct, supposedly got the visual treatment at Los Angeles’ Eagle Rock Plaza, where fans spotted the two according to social media accounts. (VIBE)

We can’t believe this! “Work,” is amazing. Described as a “down-tempo, syrupy dancehall ballad” by Complex, the song is expected to be on Rihanna’s upcoming new (and eighth) album, ANTI. It’s unclear what the lyrics are, but there’s a beautiful verse from Rihanna in one clip, and a hot snippet featuring Drake in the other. (Hollywood Life)