Maybach Music Group leader Rick Ross is putting love over hate in 2020. The hip-hop veteran has let the world know there’s no longer any tensions toward longtime rap foe 50 Cent despite spending years going back and forth with disses at each other.

In a new social media post, Yung Renzel kept things a buck regarding Curtis Jackson. Despite the perception, Ricky Rozay said he doesn’t have any ill will toward the G-Unit boss. Even deeper than that, RR talked about 50 low-key wanting to use his classic “B.M.F” song as the theme for an upcoming “Black Mafia Family” STARZ show.

“That’s most definitely a discussion I’m going to have but obviously you know, he’s reaching out and I’ma profit off it. And that’s what it’s about with me and I told him that. He could go to Wingstop and take a picture with a 10-piece lemon pepper and while you at it, tell him to take the picture with the black bottle and hold it up. If he do that and post that, I’ma really consider clearing the BMF record for him, for his show. Shout-out to Southwest T. Me and him already did business since he’s been home. Shout-out to him. So I would love to see the brother shine. It’s not about Curtis Jackson at all. But tell him to take the picture with the Belaire bottle, hold it up and hold it up high. And when I see it, tell him for the first time I’m gonna come to his page and I’m gonna actually like the pic.” (Billboard)

Earlier this year, reports emerged about BMF co-founder Big Meech getting denied a request to leave prison early. Despite T being scheduled for release, Meech’s legal team couldn’t convince a judge to green light the request despite the current coronavirus epidemic.

The Flenory brothers were sentenced to 30 years in federal prison in 2008. Terry Flenory was scheduled to be released Tuesday as part of a broader effort by officials to stem the spread of a virus that, according to federal prison data, has killed at least 40 inmates and infected more than 2,300 prisoners and staffers. (Detroit News)

“Big T said get Jeezy a** too ,how you Screaming BMF Who helped you get a record deal. Then Meech mom is calling you and texting you to let you know ‘T is home and You ignoring the phone calls. so now his mom said fuck the backstage passes and free tickets to the concerts pick up the phone N*gga. @jeezy#starz#BMF coming soon” -50 Cent’s Instagram

“T home puff he said um, he want his f*cking money. I’m not tripping, and i know you ain’t tripping so just holla at him. #bransoncognac #lecheminduroi” -50 Cent’s Instagram

“yo @irvgotti187 you best be coming up with that bread you borrowed from Big T in Encino you sucker a** n*gga. you didnt go see him or put nothing on his books. yeah he home now so you can stretch out to him or get stretched. #starz#bmfitgear” -50 Cent’s Instagram

Over the past few months, 50 Cent has relied on social media to plug his upcoming Black Mafia Family STARZ show. 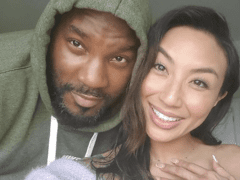