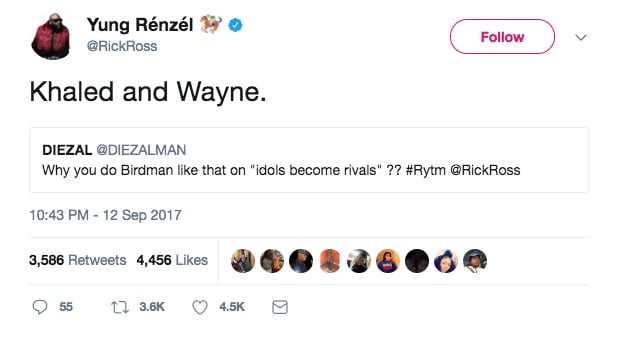 “You know, when I hear that [Tyga had to pay a million to get out of his Cash Money contract] Birdman lucky he ain’t have to go through that with Renzel. It would have been a little different. I couldn’t respect that. That ain’t right. I love music that much. I want to make some incredible music, of course I want to profit on it, but I wanna make some incredible music. That’s first and foremost – let’s make history.” (“The Breakfast Club”)

In June, DJ Khaled addressed Ross name-dropping him on the diss track.

“Ross is basically saying, ‘Khaled, he don’t complain. He keep it moving.’ I think y’all know me as a person. Y’all never heard me come and talk about people and stuff like that. He’s basically saying, ‘Yo, Khaled, You blessed. Keep winning. Don’t stop.’ … Birdman, that’s my friend. I wanna be clear. As far as anybody that has a situation, I pray and I hope that people can talk to each other and work things out. Birdman, all that is is, you know, at one point I just moved on with We the Best. I got nothing but love for Birdman. They gave me an opportunity. I appreciate every opportunity that’s ever given to me. It doesn’t matter what happens to the opportunity, it’s an opportunity.” (“The Breakfast Club”)

“I think Rick Ross is a great rapper. He’s a very good lyricist. He can put wordplay together. As far as speaking up for another man, he can’t speak up for me. I respect a man for who he is. I respect Birdman. On my situation, me and Birdman dealt with our situation and we handled it like men which I think every situation should be dealt with anyway. I think if he did the record, he shouldn’t say my name without hollering at me. I don’t think he should have mentioned my name – I got love for everybody. It’s just like a family, sometimes family fall out. … That’s not gonna fix the problem. It’s gonna make another problem escalate and it doesn’t have to be that.” (TMZ)