Rick Ross Clowns 50 Cent Over Vivica A. Fox Feud: “We Don’t Get Our Booties Licked”

Maybach Music Group leader Rick Ross has refused to cease his issues with rap star 50 Cent and publicly dissed him in an interview this week.

“In the majority of the time, the distractions aren’t even worth it, especially when you have single-handedly torn something down that you’ve once respected and admired to the point where they are nothing – We are not firing and tearing down. We’re not chasing behind actresses. We don’t get our booties licked. We live by principles. It’s a certain code of ethics. As men in our position, there will be problems, there will be disagreements, but as … kings, it’s certain things we don’t do.” (AP)

A few days ago, Ross said he would stop feuding with 50 if it meant racism would end.

“I’ma keep it 100. I’m going to stop racism,” Ross responded. “Yeah, yeah, yeah. If I gotta take him to Wing Stop and have him eat some lemon pepper wings to stop racism, that’s what I’m gonna do.” (“The Nightly Show with Larry Wilmore”)

“He shouldn’t have did that. 50 gets ugly, man. [laughs] 50 gets ugly, man, they know that already. They grabbed Gunplay’s chain, the MMG sh*t. They know it gets ugly. It gets physical. At the end of the day, if n*ggas ain’t ready for this drama, stop playing with it because some n*ggas take drama to the next level. A n*gga like 50 will take it to the next level. You can’t play with a n*gga like him unless you’re ready to get into a shootout or bang out. You can’t play with that n*gga. That n*gga got goons that’ll do anything for him.” (“Mikey T The Movie Star”)

50 took personal offense with Ricky Rozay referencing his son interning for him on social media last week and promised to see him in-person. 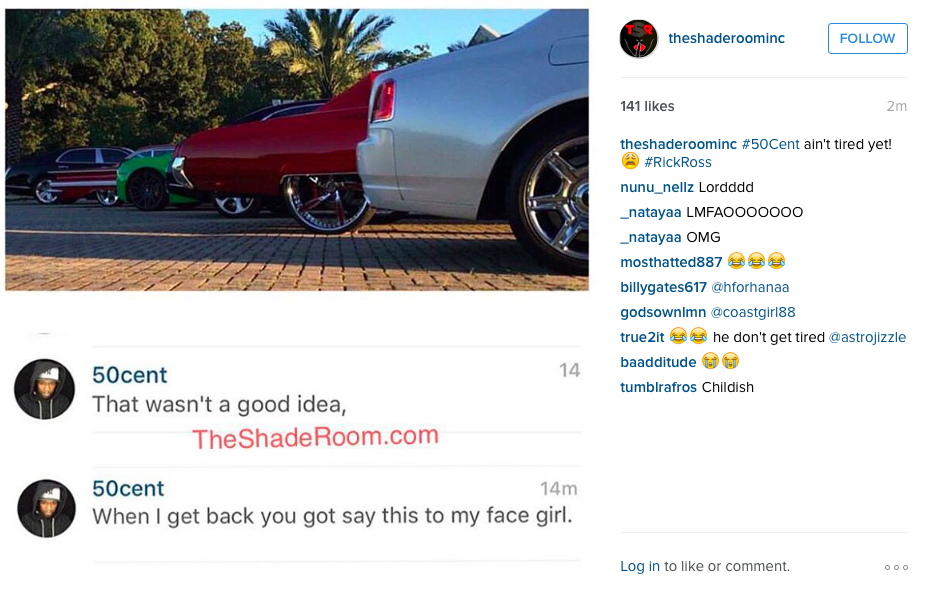