Maybach Music Group leader Rick Ross has something cooking up with longtime comedian Chris Rock and teased social media about it this week.

Ricky Rozay went to Instagram Thursday (June 23) and hinted at a collaborative effort coming together with Rock. 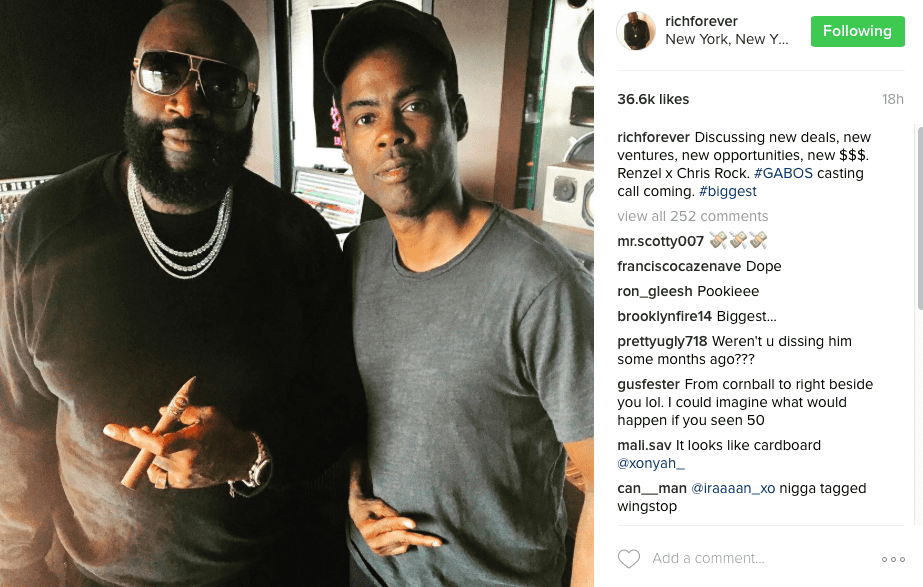 Recently, rap veteran Nas discussed his admiration for Ricky Rozay and the possibility of him producing a project.

“No, there’s no truth to that,” Nas said about the Rick Ross executive producing his next solo album. “I’m a free artist. I’d be down to do something like that down the road. I talked to Scarface one time years ago about producing an album for me. DJ Premier-producing. I’m into that. Large Professor. Ross got great beat ideas so you know, I got a lot on the table right now. But you know, don’t be surprised somewhere down the road something like that could happen. Shout out to the boss Rick Ross.” (Complex)

Last month, Ross talked about the possibility of executive-producing Nas’ next release.

“You know, Nas is so great as an MC. He’s a legend. So I wouldn’t even play with that, because of course you know Rozay will f**king do it! You know I would love to do it, but more importantly, the way Nas moves is so calculated. I feel like everything he does is perfect timing. He’s a legend, and I would love to. You know it’s whatever for the big homie.” (Lindsey India)