Remy Ma Unlocks Her Thoughts On Prison Stint: “1 Year Ago I Was Sitting In A Cell”

Former Terror Squad member Remy Ma took some time to reflect on her past stint behind bars on a gun conviction this past weekend.

Remy took to her Instagram page to speak on her time in prison and credit rapper husband Papoose for holding her down. 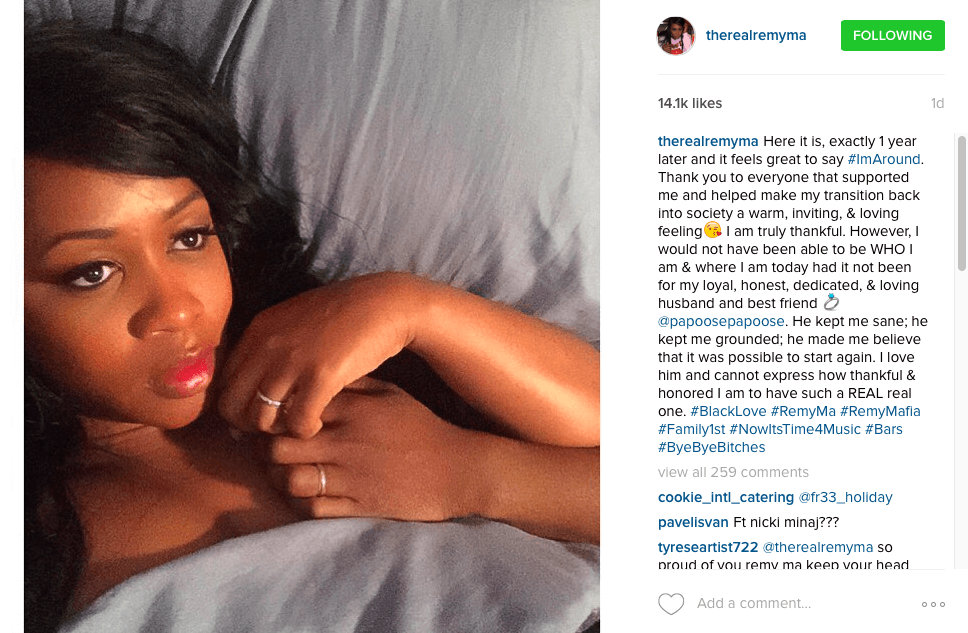 Last year, Remy talked about leaving her prison stint and what she had lined up once she tasted freedom.

“I want to do little stupid things that people may even be surprised about. I want to go to an amusement park. I want to get my hair done, my nails done. I want to get some Popeyes, for real. But more than anything, I want to get back in the studio. When you’ve wanted to say something for years, and couldn’t, and didn’t have that platform–that’s all I want to do. I’m not rapping about popping bottles and being in the club, because it’s different experiences. But I’m ready to go in. I want people to know Rem is back.” (The FADER)

She posted up photos alongside rap producer DJ Khaled after being released.

I had a busy first day #ImAround

After serving six years of her eight-year prison sentence, Bronx rapper Remy Ma was released from the Bedford Hills Correctional Facility for Women on Friday. A representative from Remy’s camp confirmed to Revolt that the rapper left prison on Friday afternoon. She followed up her release by posting “I’m Back” on Instagram. (Billboard)