Reginae once again relied on her Instagram page to share her latest Oscar-worthy performance. In her clip, she’s dancing and turning up in her living room before the fun is interrupted by fake gunfire.

A few days ago, Carter went all out with her at-home acting. The hip-hop vixen shared a breathtaking reenactment from classic 90’s flick Waiting To Exhale.

Reginae picked one of the most memorable Waiting To Exhale scenes. The unforgettable moment features Angela Bassett‘s character going off in a closet.

“This motherf*cker is psychotic! I bet you there are serial killers less anal. A white woman’s the only one who will TOLERATE your smug a**. I was your white woman for eleven years! You couldn’t have started that damn company without me. H*ll, I WORKED MY A** OFF! I mean, I got a Masters’ degree in business, and there I was – his secretary, his office manager, and his COMPUTER! “No, Bernadine, you can’t start the catering business this year. Why don’t you wait a few years? Yeah, don’t start now; wait one, two, three years. I need you to be the FUCKING BACKGROUND to MY foreground!” 732…732…the number of times that we made love. I remember when that bastard told me he was counting – right after 51! I’ll show you! F*CK ME FOR NOT LEAVING YOUR A** THEN! But the worst, oh the F*CKING worst, was making my kids go to a school with two other black children because you didn’t want them to be improperly influenced. Well, guess what, John?! YOU’RE THE MOTHERF*CKING IMPROPER INFLUENCE! Get your sh*t, get your sh*t, and GET OUT!“ 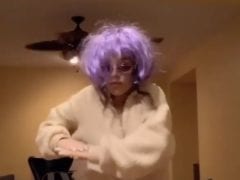