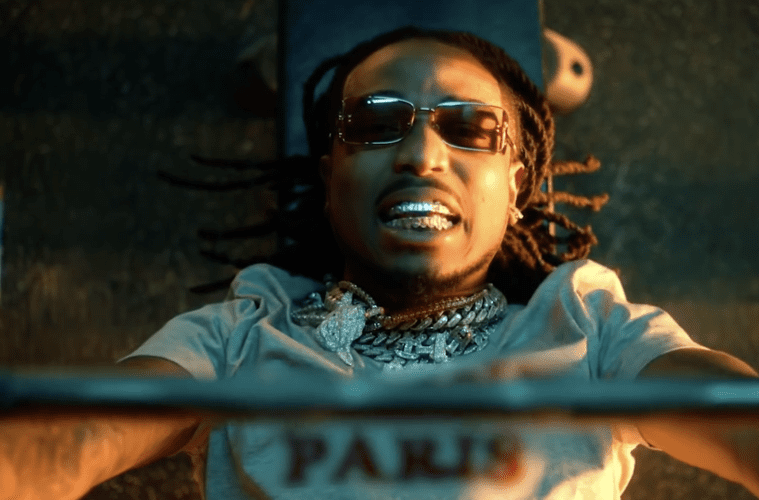 Quavo Is Playing It Safe + Going The Face Mask Route

Atlanta rapper Quavo isn’t taking any chances. The hip-hop star has come through with a swift reminder to fans he’s rocking a face mask to help slow the spread of coronavirus.

Heading into the weekend, Quavo shared a few pics of himself donning some facial protection as he joined the face mask movement. One pic features him chilling outside next to a Mercedes Maybach.

Last Sunday, the rapper hit up his Instagram page with a throwback Easter pic. Huncho shared an unforgettable throwback pic of his crew Migos chilling with rap star Kanye West.

“That shirt is CRAZYYYY” -Tory Lanez

On Easter Sunday 2016, Kanye and Migos raised eyebrows after linking up. The crew linked up and teased fans about possibly having new tunes on deck.

Migos caught up with Kanye West on Easter Sunday. West’s photo with Offset and Quavo further proves a song collaboration is in the works. Model Ian Connor got people talking last month after taking to Snapchat to announce there was a song collaboration sitting in the vault. Quavo and Takeoff later posted a clip of themselves vibing to the track in traffic. (Kollege Kidd)

In 2018, Quavo teased fans about the idea of having a Kanye collaboration on deck. Past plans had Migos and Kanye lined up to appear on West’s Yandhi album.

Quavo has shared that the Migos recorded a song with Kanye West, to appear on his delayed Yandhi album.  “We did a record for [Kanye] on Yandhi. He called us at like [6 a.m.] in the morning,” Quavo said during an appearance on Power 106’s The Cruz Show (Oct. 19). The rapper remained tightlipped on details of the unreleased track, and it remains to be seen if West will allow the world to hear the creation on his anticipated LP. (Billboard)