Quavo continues to mourn the loss of rapper Takeoff. In a new video on Twitter, he shouted out “Takeoff” and cheered on the Georgia Bulldogs, who won the College Football Playoff national championship. 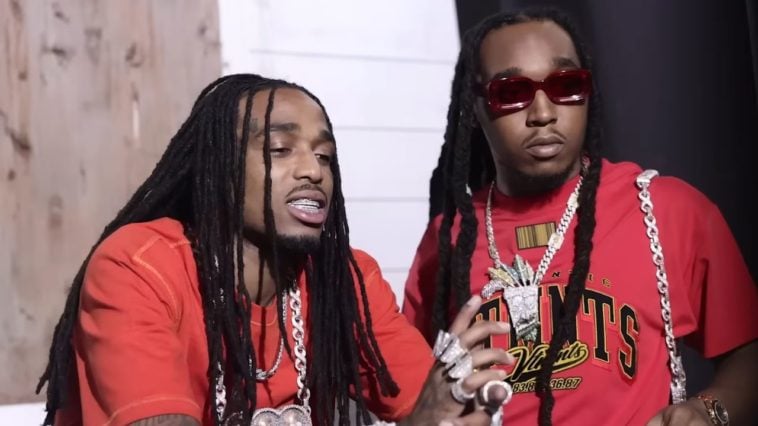 1.5k Views Comments Off on Quavo Honors Takeoff By Celebrating With The University Of Georgia Football Team
Share

Atlanta rapper Quavo is still grieving the death of fellow Migos rapper and nephew, Takeoff, who was shot and killed in November 2022. To feel better, he watched the University of Georgia win the College Football Playoff national championship on Monday night.

In the video, the “Lamb Talk” rapper was wearing Georgia apparel, smoking a cigar, and gave a shout-out to Takeoff.

When the cameraman ask how Quavo was feeling, Quavo replied, “Long live the rocket” and positioned his arms like a T. The word “rocket” refers to one of Takeoff’s nicknames and his only solo project, 2018’s The Last Rocket.

Georgia defeated TCU 65-7 in the game.

Quavo also recently released a song, “Without You,” dedicated to Takeoff. Fellow Migos member Offset also honored Takeoff by displaying pictures of him on stage while performing different shows.

Former Migos rapper Quavo continues to mourn the loss of fellow rapper and nephew Takeoff and paid tribute with a new heartfelt song. In “Without You,” Quavo raps about how much he misses the late rapper.

Atlanta-bred rapper Quavo is still mourning the death of fellow Migos member and nephew, Takeoff, who was shot and killed last November. To honor Takeoff, he released a new song, “Without You.”

In the video, Quavo is sitting in a chair while smoking a blunt as the lyrics appear on the screen. The first lyrics that start the video describe what Quavo feels as he raps:

“Tears rollin’ down my eyes, I just seen an angel fly, tell me I’ll be fine, oh why.”

The “Lamb Talk” artist also raps about how holidays and family gatherings won’t be the same without him and how his family is still struggling with his death. In November, Takeoff’s brother, YRN Lingo, posted a heartfelt message to The Last Rocket artist.

Posthumously, Takeoff’s song “Jealousy” was released. In addition, he was featured on Atlanta producer Metro Boomin’s latest album Heroes & Villains on the track “Feel The Fiyaaaah.”

Offset has also paid tribute to his cousin and former group member Takeoff. He had big posters and pictures of him on stage during a performance. Photos of Takeoff were displayed onstage with the Jackson 5 song “Never Can Say Goodbye” playing in the background.