Music mogul Pharrell Williams has reportedly put a swift end to reports claiming he suffered a black eye from an altercation with close pal Jay Z.

According to reports, Williams did not get his black eye from Young Hov.

Reports began surfacing about a physical fight between Jay and Pharrell, because the singer backed out of a Tidal deal, but one source flatly calls BS on the story. Pharrell is telling friends and associates he and his wife Helen were “joking around in the kitchen” and a spatula “flipped up and hit him in the eye.” (TMZ)

Check out where the rumor started from on the next page…

Initial rumors claimed the black eye came from an altercation with Jay over his growing Tidal streaming service.

“Jay Z and Pharrell used to be CLOSE friends and business associates, and the two planned on pattering in Jay Z’s music streaming business TIDAL. That is until Pharrell BACKED OUT OF partnering with Tidal … and instead worked out a BACK DEAL WITH APPLE. One industry insider told [MTO], ‘[Jay Z] took it as a slap in the face for Pharrell to do that. Especially since Pharrell was one of the main people who came up with the idea for [Tidal].'” (Hip Hollywood)

Aside from this, Williams recently revealed his plans to release another album with his N.E.R.D. music group. 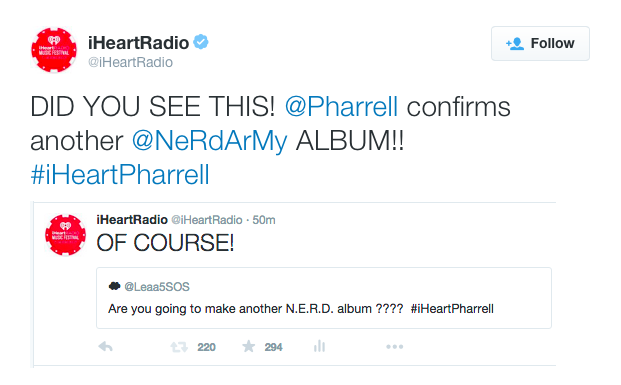 Earlier this year, N.E.R.D. reunited for a few collaborative songs.

N.E.R.D. hasn’t released a studio album since 2010’s Nothing, but that doesn’t mean they’re gone forever. N.E.R.D. most recently released three tracks earlier this year as part of the soundtrack for The SpongeBob Movie: Sponge Out of Water. (Entertainment Weekly)